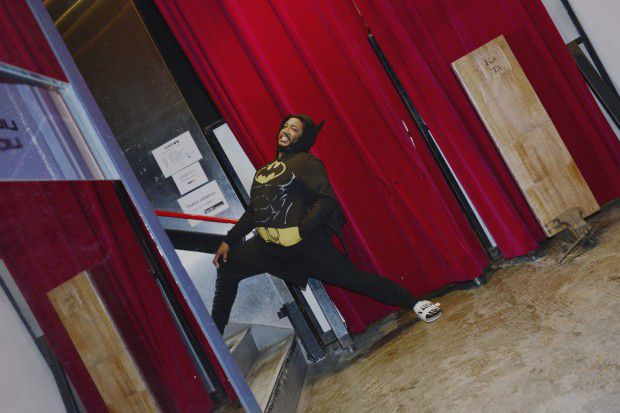 I thought your album was really interesting. All of your friends and people from all genre and places are on your album.

Despite having all those artists from different background, you put everything into this cohesive one album. How did you do that?

– It’s not a process pinpointed by a moment. It feels like a slow turning forever shaping process. Sometimes the album is just like a snapshots. These are the people I’ve been working with for years. Not like people I just wanted to collaborated with and got to know recently as they’re known or something. It’s like pieces of puzzles of what these people and I have been doing together. Like, figuring out how I can make sense. I just tried to make a clear straight line.

Did you make a lot of time to make this album?

– Yeah. I didn’t stop writing until maybe mid last year. But I had to go for touring a lot and started working for other people’s albums. But I was making my own album at the same time when I can.

Then you must have been inspired by a lot of people who you worked with.

Your music is really interesting because the songs are very technical and the melodies are really beautiful but the lyrics are quite funny. For example, you have a song about a cat and I especially love the part saying “it’s cool to be a cat.” How does that work for you putting these opposite elements together? Very technical and complex sound and melodies plus funny lyrics?

– I think it’s identifying humor. I love humor. I want to start and end things with humor. Even if things are serious, you know, I’m always trying to find a humor in it. At the same time, it’s just finding out how you really feel about stuff sometimes. You just say it. But it takes some minutes to get there. “It’s cool to be a cat” is a quite simple phrase but it’s actually not so easy to say it as it seems because you think how you should express that as an artist or something. But I go beyond that and try to get deeper, and then you end up getting to that kind of simple and funny expression (laughs).

You just mentioned those people who are featured on the album are the people who you’ve working together long time. So I’m sure there’re a musical connection there, but in addition to that, there is something more that goes beyond age, background or genre of music. Was there any intention to express the fact that music can pass all the differences?

– Yeah. Absolutely. Music is everything and nothing at once.

I love that expression. Beautiful.

– Two Redbulls made me say that (laughs).

Your music on the album is beautiful impact but you really stretch them out on the stage like you play 15 minute songs or you do a lot of improvisations. Is there a different approach on playing live and recording music?

– Hmmm. I feel like they’re very similar but different. A lot of time recordings, it kinda changes your mindset but the truth is, in order to record, you have to still be playing live. It’s slightly different though.

You grew up in musical family and a lot of your people in your family play instruments. But why did you pick up the bass?

– I don’t know (laughs). I was a baby. Hahaha. I always liked strings.

Did you pick up the bass or did your parents give you the bass?

– I don’t remember because I was a baby (laughs). But I remember I played violin a bit too. I don’t know but I think it was a gravitation to the bass.

So everybody in your family is a musician. Do you think that has any influence to you? How does that influence your music?

– Well, for a person coming from musical family, everybody’s influence is very different. But personally, my family is the only reason I make music. That’s where I came from. I like to think of it is in my blood. If I didn’t come from there, I’d have been a different person. So yeah, it’s a big influence.

– Yes. Mike Muir told me “do not have any fear”. The metal and hardcore crowds are really different. They let you know when they don’t like you (laughs). So I was scared and nervous at the first point. Robert Truhillo was there, and I’m a black so people often thought I was Rocky George. But Mike told me how I was different from the other members and how amazing it is. He always pushed me. He made me take bass solos, you know, he was very serious about how important it was to stand out. I feel like Mike is always one of my biggest supporters. It was like the unofficial training. I really appreciate it. The music was definitely very punk and speed metal oriented but he was very much understanding of Jazz and both music are made with free spirit of music. And what I make is kinda punk Jazz.

This question has nothing to do with the previous questions. But do you like Japan?

Did you buy any records or any music in Japan?

– No, I’ve been just working. I haven’t got to go shopping yet but I bought a pair of socks. I’d love to though.

– I’m a big fan of Ryuichi Sakamoto. And I like Hiroshi Sato, and Cornelius. There are a few more but I really enjoy songwriter and composers.

Ryuichi Sakamoto starts writing songs with piano because he plays piano. How about you? Do you also starts with bass?

– Yeah. Because bass is always in the room.

Thank you very much.