I & Fashion Issue : イェッぺ・ウゲルヴィグ『Fashion Work 1993 – 2018: 25 Years of Art in Fashion』インタビュー／Interview with Jeppe Ugelvig 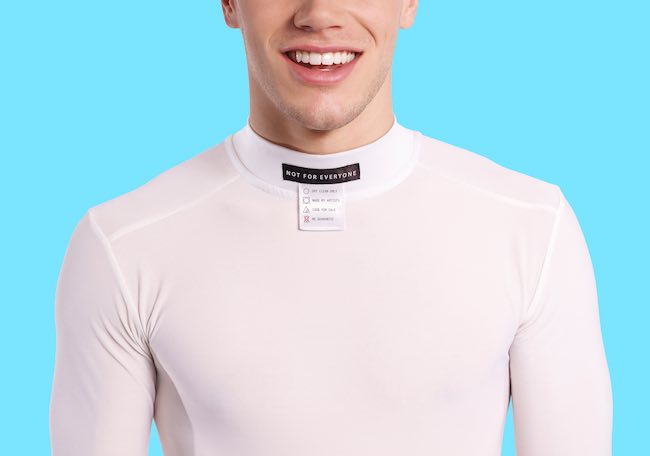 Not For Everyone t-shirt. Courtesy DIS

Jeppe Ugelvig : Fashion was my first love! When I was young, I spent most of my time on the internet and reading magazines. I got my first computer when I was ten years old. The combination of being online and myspace, Blogspot was a huge part of my life. Coming from a small town in Denmark. I would buy fashion magazines online and read them religiously. Which then lead me to start interning in Copenhagen when I was fourteen. I was interning at a Danish Fashion magazine called “Cover” and would later work for the avant-garde fashion label MoonSpoon Saloon.

-As a teenager, you were already interested in this field?

Jeppe Ugelvig : It was my biggest dream to go to Central Saint Martins.When I moved to London at the age of eighteen, my interest in art developed more. I became more academic and did some art criticism.
When I became editor of a Danish magazine, DANSK Magazine, I realised that fashion discourses and is a bit superficial sometimes. I wanted to bring the things I had learned from art to fashion. Or combine these two things. One being very intellectual, one being more about clothing and seeing if there was a way to bridge these two disciplines.

-Before you published this book, Fashion Work, you had an exhibition.

Jeppe Ugelvig : I was a student at the Center of Curatorial Studies of Art. We had to do a final thesis and discovered these archives. I started connecting Bernadette and Susan. I became very close to Susan and started opening up her archives. I digitalised everything. All the images are hand-scanned by me. In a way, it is New York history as well. I became very close to them. 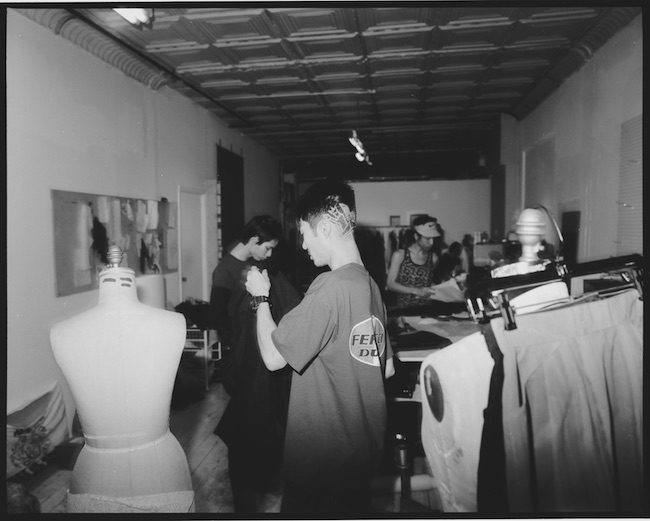 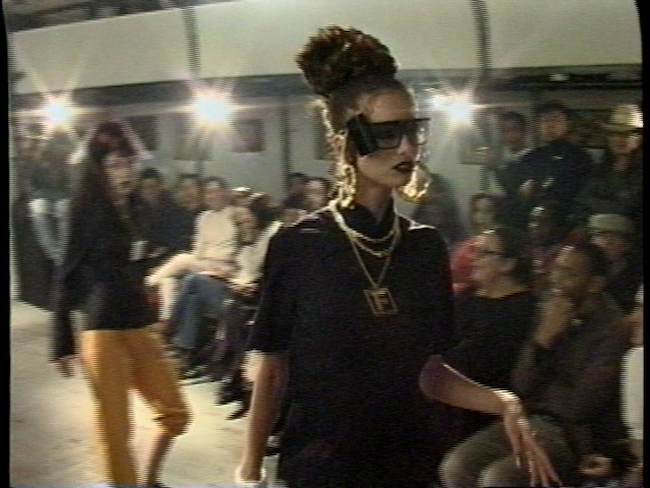 -How long did it take to prepare for this exhibition?

Jeppe Ugelvig : It took a year. I did it on a shoe-string budget of 3000 dollars. It was crazy. BLESS didn’t know me, but they trusted me even as a student. They put everything in a suitcase, and they flew it to Los Angeles and left it there and a friend of mine had to bring it. We didn’t have money to do the shipping so we had to get people to bring them around. We had to hand-carry everything, even the wallpaper. It was hilarious. I have never done an exhibition before so I had no idea what I was doing.

We did the show and it was really good. It was in a small museum in upstate New York. Not so many people saw it and I kept thinking I wanted to show this history to more people. The artists were excited and honoured to have this in print and this history to be revealed. So at first, I wanted to make it into an exhibition in Europe, to restage it. But it was quite hard because a lot of museums are not interested in fashion. Someone suggested making it into a book. I am also a writer, a historian and there are so many archival materials that never made it to the exhibition.

I am amazed that museums and galleries are still very conservative.
Yes, because you have art museums and fashion museums. Fashion museums are so focused on the garment and the big names of fashion like Margiela, Coco Chanel. This is a very underground history.

Jeppe Ugelvig : I was more familiar with Bernadette Corporation, historically, and I used to work for DIS Magazine. I was their European editor when I was studying at Central Saint Martins. My first fashion and art writing had been done in this magazine. So I was part of it. I wasn’t part of the New York scene, because I haven’t moved yet. I was eighteen-years-old living in London writing articles, writing reviews and that was my training ground. It was where I learned how to write. Being a part of that amazing platform and both being able to do fashion and art stuff with the same critical and intellectual focus was nice. Bernadette Corporation, one of its numbers was Susan, in the very beginning. And Susan Cianciolo, when she launched her brand she got help from Bernadette to style it and Susan is really good friends with DIS and BLESS. While researching this project, I realised everything is connected. 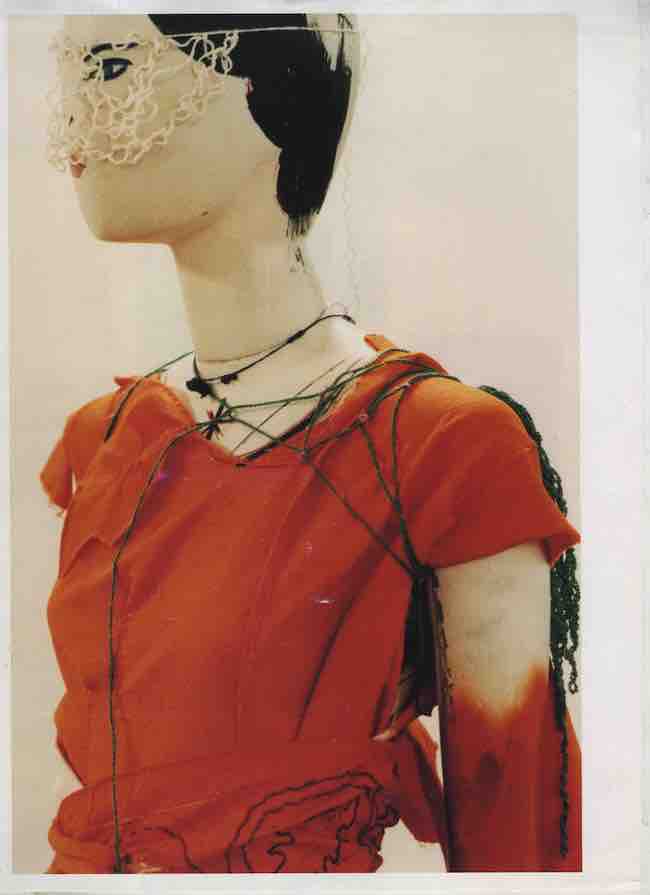 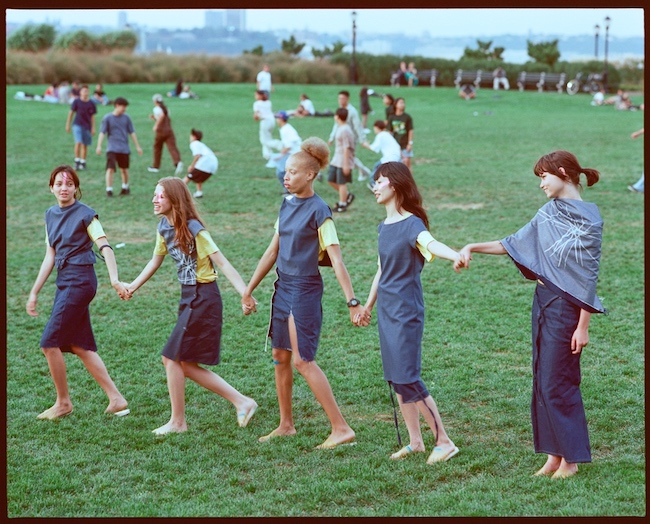 -What do you hope to communicate to the fashion students?

Jeppe Ugelvig : By focusing on history, focusing on production, I want to show how history is always made by people who are struggling. Making things out of nowhere, no money, no budget but how there is always an alternative. When you go to fashion school there is this idea they put in your head that you have to make an independent fashion brand with your name and you have to do collections four times a year, you have to do fashion week, fashion shows, you have to do wholesale. You have to do it the right way, normal way, the Margiela way, or the old school way. But this history shows that there are many other ways to do fashion. It doesn’t always have to be a collection of clothing twice a year, it can be images, publishing it can be furniture, it can be whatever this is. This is also a way of having a fashion practice. I think this is something not taught in school. There are a lot of art students who want to do fashion stuff, and fashion students who want to do art stuff. And this book is trying to say that there is history for this. This has been done before so you can do it as well. Of course, it is a different time now, but there are always new possibilities. There are new ways to negotiate these two systems.

Jeppe Ugelvig : The internet. This changed everything. Globalisation and the internet go hand in hand. The export of the supply chain, also the rise of the internet. Also, the fact that fashion became industrial recently.

-With the current pandemic, are there any changes in art and fashion?

Jeppe Ugelvig : It’s too soon to say but obviously when the pandemic hit, clothing shops closed, fashion houses all froze their bank account and stopped buying advertising. This is the lifeline of publishing.
Fashion weeks are all off at the moment. and I think it’s more of a blow to the mainstream fashion industry than the luxury fashion industry. In this day and age, art fashion hybrid people either operate on social media, like Instagram, or in galleries and museums. And although things were paused, they were not cancelled. They’ve been just postponed. I don’t know when we’ll see a full flash of Paris fashion week again. At the same time, art fashion projects never had a place by the calendar. We don’t know.
If there is a financial crisis now, we might see a new 1990s, New York.
The DIS Magazine came about from the last financial crisis. They wanted to start a real fashion magazine, a physical one, but there was not enough funding for it because of advertising so who knows. A lot of young people want to start fashion brands, and it’s just not possible right now.

-What can be done to change the attitude about sustainability, including the older generation?

Jeppe Ugelvig : Everything has to change. Fashion is unsustainable, especially fast fashion. The mass consumer system we are in is just destroying the planet, it’s one of the biggest polluters. I think it’s just not enough to do a green fashion line or to do one organic t-shirt. You need to see the full system, starting with how things are made. I think artisanal independence in house is one part of that solution but it’s not everything. Even if you do in house production, where is the material coming from, who is dying your fabrics. Is it coming from Bangladesh, do you know who is collecting the cotton? The people getting cancer every time they have to spray chemicals. Companies have no responsibility. They don’t think about their political responsibility beyond their nearest employees. This project is called “ Fashion work”, but a big part of this system that I don’t talk about in the book is the other ‘Fashion Work’ the factories and the fields. We need a total revolution, not just small little gestures. When places like Uniqlo and h&m do like sustainable initiatives, it is almost like a joke. Because the problem is not Uniqlo, the problem is in the system of fashion. It’s forever going to be unsustainable to have to buy t-shirts. It just means that the earth is paying the price. 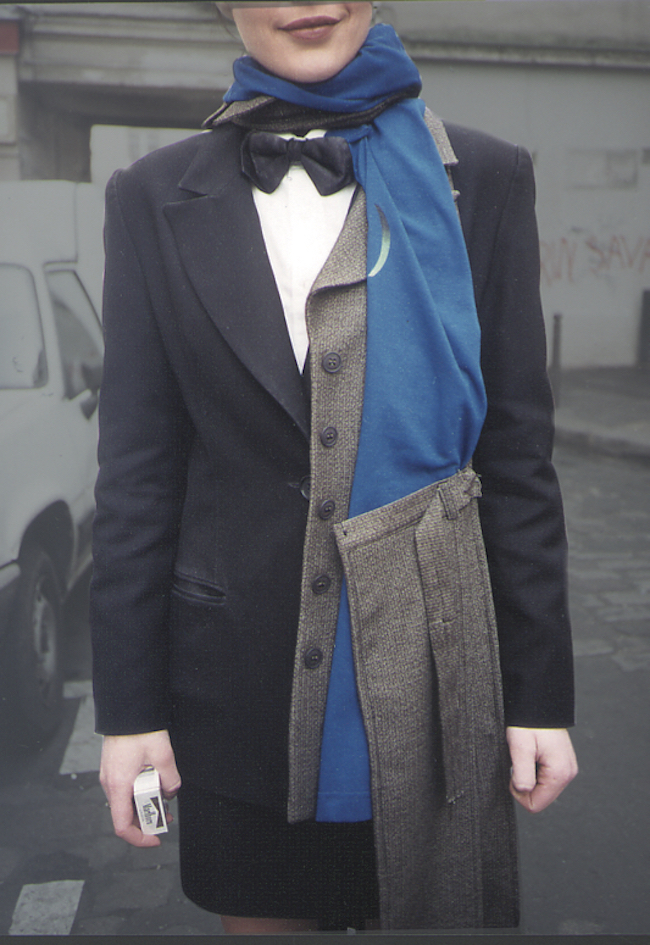 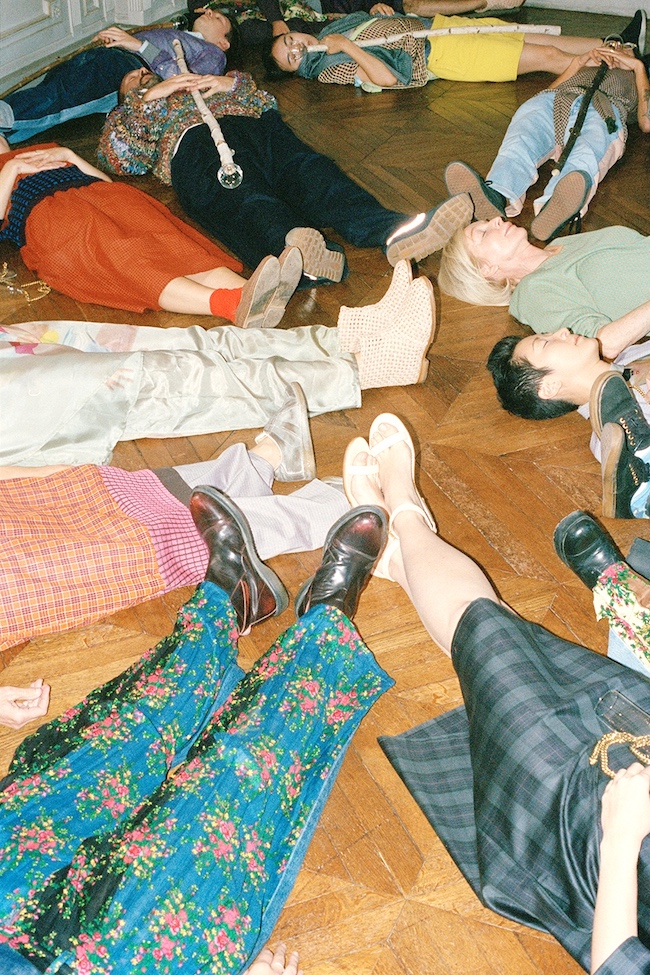 -The distance between art and fashion is becoming closer more than before. What do you think about the relationship?

Jeppe Ugelvig : It moved closer together and further away from each other over time. The 90s was the period where it was close. The 20s, 30s Europe they were very close as well and then they lived far away from each other. Perhaps we are in a time when they are moving closer together again, in this space of the internet, media, technology. So I would like to say and think that. I am excited to see what’s going to come again. Because of course, this is a historical project, even DIS Magazine is closed now. I think we see new ways art and fashion are merging both in very commercial and boring ways. Big luxury houses, doing art projects. but also small independent critical practices taking interest in fashion. Something interesting is going on here, the US and also Asia.

In early 2000s fashion goes from being a very niche small industry to be a global mass form of entertainment. This is the time of America’s Top Model and Project Runway. Its the time where fashion becomes a form of mass culture and that means it moves away from art.

-You have started your next project already? 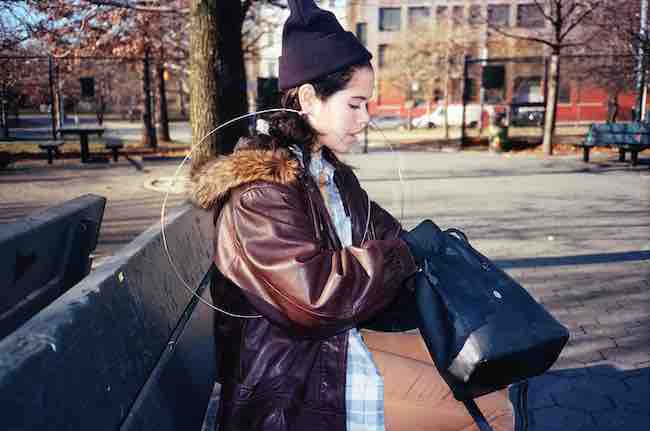 Jeppe Ugelvig
Jeppe Ugelvig is a critic and curator based in New York and London. He writes, curates, and publishes across art, fashion and its various intersections. A graduate of Central Saint Martins and the Center for Curatorial Studies, Bard College, his writing appears regularly in Frieze, i-D, ArtReview, AnOther, Flash Art International, PIN-UP, Spike, and LEAP, amongst many others. He has staged exhibitions and projects in London, Berlin, Copenhagen, New York, Turin, and Ramallah. The book is designed by Laura Coombs, currently Senior Designer at the New Museum of Contemporary Art and a Lecturer at Princeton.
https://jeppeugelvig.com/bio