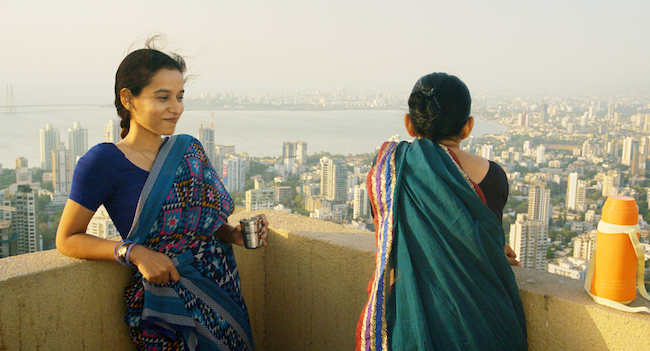 ――Why did you decide to tell this story?

Rohena Gera: This class issue is something that I’ve struggled with my whole life. As a child, it was present in my home, and to be living with segregation in your own home was very strange. And you feel it even as a small child. You feel that there is something wrong with this picture, you know? I never really knew how to address it or how to talk about it. I’ve never spoken about it even actually to my family. I never ever mentioned it to my mum. But I carried it in me, and it was something I felt quite terrible about for many years that I’m part of this system. And I’m the class of the oppressor, right? So it was quite hard. It’s in your face everyday and you are aware of that everyday.

――This is your first feature film, right?

Rohena Gera: Yes. After my documentary, I was thinking about all these ideas of love, how we choose to love who we love, and somehow it just came to me to do an impossible love story with these kinds of characters. And I thought that would be a way to address this issue but in a way that’s interesting, that challenges our ideas, that makes these two people equal. In a way, you can make them both equal, they both equally fall in love. I thought that would be an interesting approach for me for the first film. It’s always really hard to make your first film. And I’m glad I chose the subject I really care about, because then, you are willing to fight for it. You really have to do it the way you believe in doing something for the first film. So yeah, it really means a lot to me. It’s very personal for me. 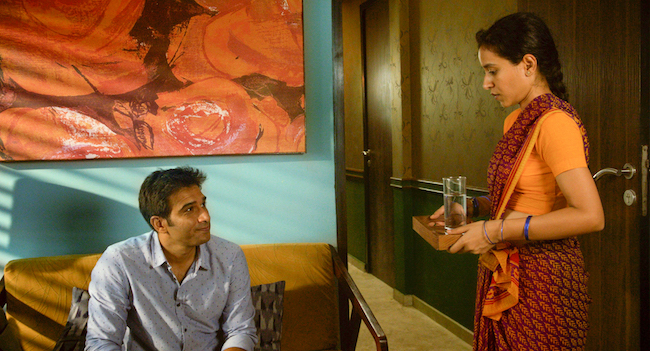 ――Do other people feel that way, too? Is it something like an elephant in the room that people don’t talk about? Or people just don’t think anything about it?

Rohena Gera: It depends on the people. For example, there are a lot of people who help their staff by educating their children. They give them money for education or help them with their medical expenses if there is a problem. There is definitely a feeling of being aware of your extreme privilege compare to this person, you know? But a lot of people don’t question it deeper than that. They feel like, “Ok, I’m privileged. I’m lucky about where I was born,” and that’s it. To me, I think it’s important to respect someone. Because even if they have a low level job, that doesn’t mean that they are low level persons. And I think we tend to think that way very often in India. We judge people by the jobs that they have.

――It could happen in Japan as well.

Rohena Gera: Let’s say someone like you, who is a journalist and an educated person had to fall in love with a security guard with no education. How difficult would that be in your culture? Would that be easy? 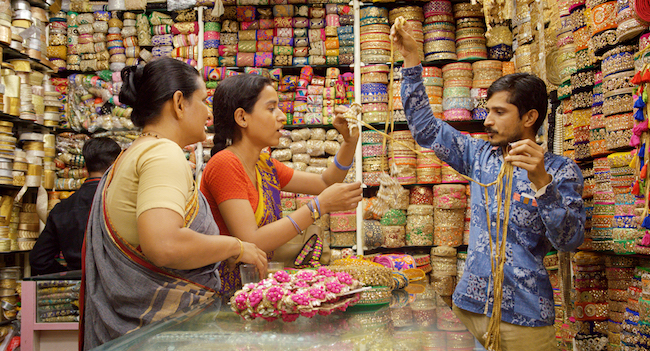 ――Yeah, I think so. However, it was quite shocking to see how Ratna was treated when she went into the store in the film. The sales clerk was very unhappy to see her in the store.

Rohena Gera: Those things are very clear. I think visually you can very quickly judge people’s class in India.

Rohena Gera: It’s many things. It’s not that she’s wearing a sari because a lot of upper class women also wear a sari. It’s the way she’s wearing it, it’s the way she walks, it’s the kind of slippers she wears, the way her hair is done… There is a way you see a working class look. It’s very quick. I tried not to make it too loud in a sense that the woman doesn’t yell at her. It was just very clear that this is not your place.

Rohena Gera: And you know frankly, I think we say that it’s about India and everything, but I think if I, as a person of color, was to wear what I normally wear which is really casual like jeans and a t-shirt, and speak French with an accent, and walk into a very fancy high end boutique in France, I might get a similar treatment. 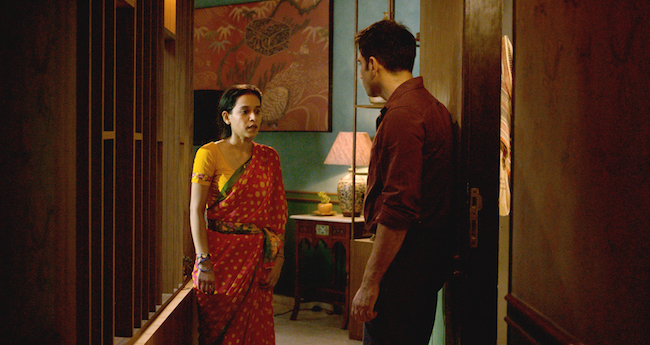 ――I love how you depicted Ratna as a strong woman who has a dream and self-respect even though she is living a tough life. What did you want to convey through this character?

Rohena Gera: I think for me it was really important to show that the importance of self-respect, and having your dream and being centered. She’s had a very difficult life, but she’s choosing to be optimistic. She’s choosing to keep her dream and to fight for something. And it’s something I find really inspiring in what I see in women around me. Also, if we compare her to Ashwin, he has everything. But he’s so lost and sort of miserable because he doesn’t have a dream, he’s not fighting for anything, and he’s just living in this gilded cage. It’s important to be true to yourself and to fight for what you believe in whatever that may be. And also, I didn’t want her to be a victim. I think she’s an interesting dynamic woman that is why he falls in love with her, you know? She’s not a victim.

――You said you never mentioned about this class issue to your mum, but has she seen the film yet?

Rohena Gera: My mum saw the film. A lot of Indian people have seen the film at festivals.

――What did they think about it?

Rohena Gera: That I don’t know. I would really like to see the reaction of the cinema of the Indian people. I saw the film in New York with Indians in the US, and they had a very positive response. People really liked the film there in Dallas at DFW South Asian Film Festival so we’ve got a bunch of awards. But I’m really waiting to see how it would be received when it’s out in India. And the reason that it’s taking so long is because I wanted to get some attention. In India, art house films don’t get a lot of support. So often you get it released but nobody even knows it’s there. So I want to try to fight for the film so it actually gets seen, and hopefully, maybe some people would believe it. Maybe some people will dislike it. But my hope is that at least it will start a conversation about these issues and about how we live. That’s why I made the film. 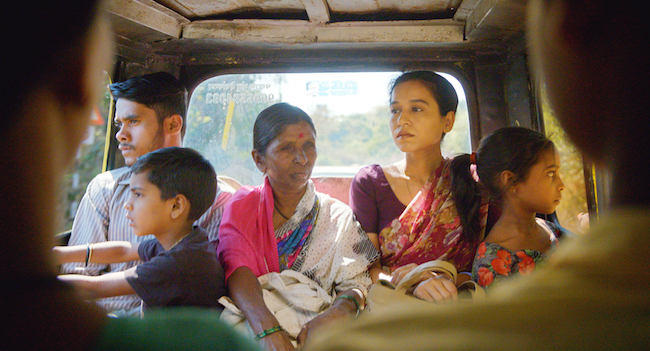 ――Do you think things are changing for younger generations?

Rohena Gera: Things are changing but not the class relationship, no. It’s really deeply embedded even in younger generations. Maybe they are more polite, but it’s fundamentally not changing.

――What would you like Japanese audience to take home with when they leave the theater?

Even though you live in a different society, I think there is also a lot of pressure in different ways. To behave in a certain way or success or work, it doesn’t seem to be free of that. In the film, Ratna has self-respect and she is dynamic. She is an exciting person even though she has nothing. And the way that Ashwin is trapped, just thinking about those ideas and what it means to be free and what it means to be liberated. I think hard work is great, but at least try to do what you love. Try to allow yourself that’s based to be where you want to be.

――I think that is a really important message for a lot of us.

Rohena Gera: It’s really hard, especially with some cultures. There is a lot of pressure. And often, at least in India, it’s a very subtle pressure. You don’t even realize how much you are doing, because you feel it’s the right thing, you have to conform in the certain way, you know? Also, I think at least in India, it works like this. It’s subtle enough that you do it for the approval that you get. You know when you play by the rules everything opens up for you. Things work out for you really well. Like in my documentary, you see very clearly what it is for women who are willing to make those compromises to be a good wife, and women who are not willing to make compromises. You know the women who are willing to make compromises have beautiful glamorous weddings and everyone is celebrating. And you are always getting rewarded for following the rules. It’s subtle. No one is saying that you cannot have a career. But they will very subtly reward you, when you do things in the way they hope you do it. I think those pressures are there. Even though women here seem very cool and progressive, I’m sure everyone has those struggles.

――I’m very excited for what kind of stories you are going to tell us in the future. What is next for you?

Rohena Gera: I don’t know what I’m going to end up doing yet, but I think I’m only be able to develop something once I stop traveling and start writing [laughs.] There are a lot of ideas that I’m playing with right now. But I think because of the way I feel about certain things, those ideas will always sneak into my work. I think even if the film is not openly about social justice, I think those things sneak in. So sometimes I describe myself as a ‘sneaky activist’ [laughs.] You get to say what you want, but it comes in the way that’s not hitting somebody on the head.

――It works better that way.

Rohena Gera: Yeah, I think people listen to you. I don’t think anyone listens to you when you yell at him. I don’t listen when somebody yells at me. So if you want to convince people, I think the way to go is more through a subtle way. I don’t know what will happen next, but I think some themes will always come back.