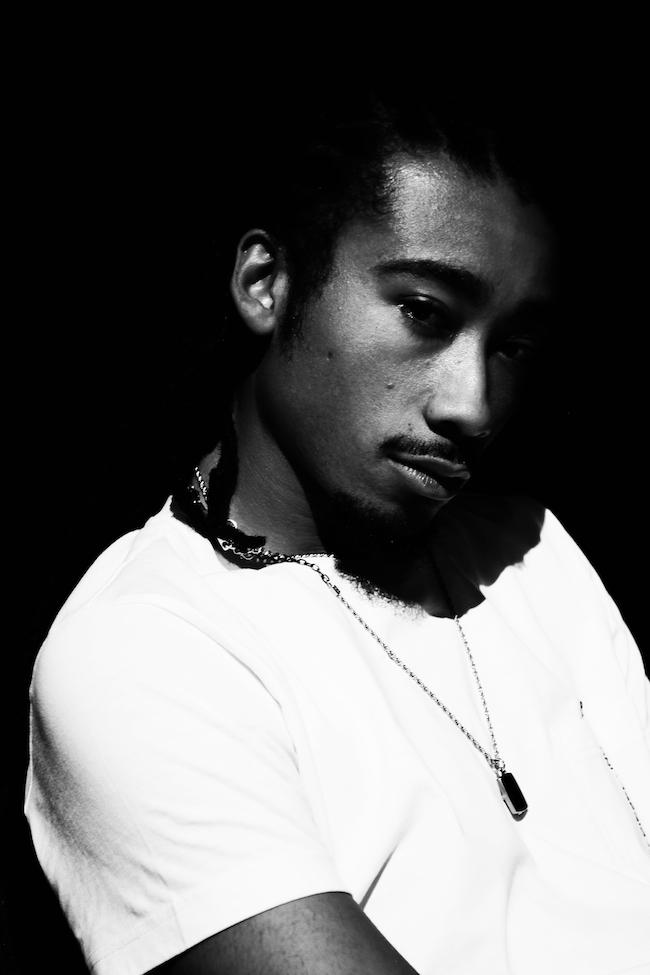 ――Is it your first visit? How do you like Tokyo so far?

Topaz Jones : Yes. Amazing,I always wanted come here. When I was in high school,I was Kanye fan.And I remember when he put Graduation album,there were many references like artwork,it was Murakami artwork everything from Japan.And he talked about how it inspired him,just like going there and taking in Tokyo,and from that moment I really always wanted to come to Japan.It was part of my dream,this is like my dream come true right now.

――I’m really grad to hear that,and I’m a big fan of your music so very excited to see your performance today.I’m into your music style around your form,I kind investigated and predict that your father is a big influence on your funk style music,and also listening to radio music created your form.

Topaz Jones : Definitely my dad is my biggest influence,probably.You know,people have reaction to music,it’s based on what they were brought up listening to or the first interactive with.And for me,growing up with so much funk music,it made my ears naturally get excited when I hear thing that base on that sounds.And as far as radio goes,I definitely listened to a lot of radio growing up,I don’t listen to as much radio now,but I have always been obsessed with people who are able to change the sound of radio,or to make radio come to them,you know like OutKast , Tyler,The Creator, people who make the music that shouldn’t necessary be like Britney Spears but they are able to find a way to sneak in there.

――As far as you doing that A Side/B Side project,so definitely you into that LP records,right?

Topaz Jones : Oh yeah. We wanted to do a record with all of songs on so we’ll definitely put out the vinyl with the next album. And last night we went to JBS,we had a great time.He put the dad’s albums, actually. 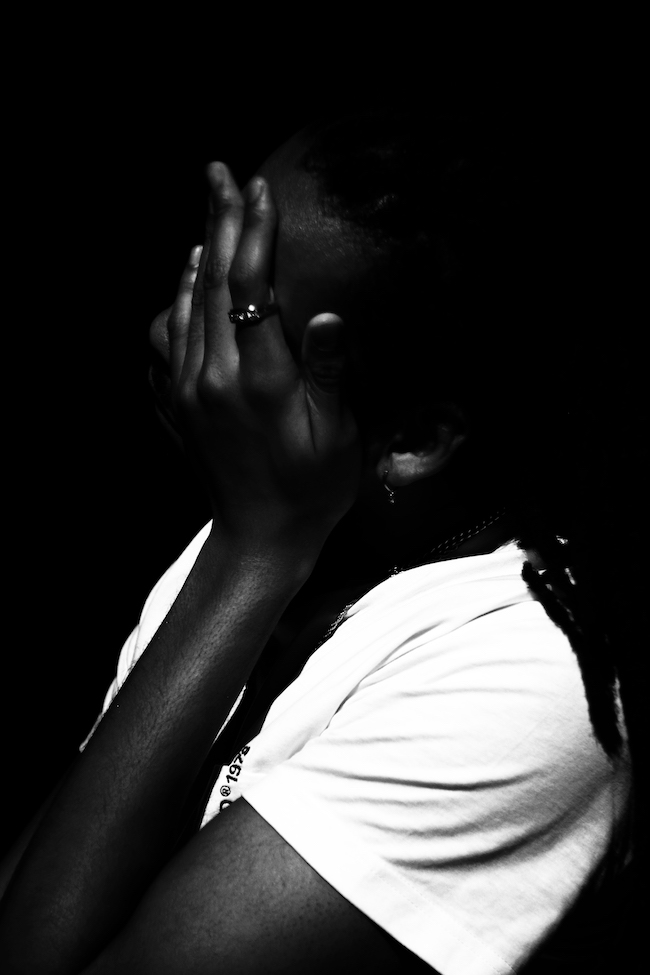 ――Is it true that you started making music from kinder garden, and you made soul music at that age?

Topaz Jones : So I wasn’t recording music,but I was writing it.And in kinder garden I didn’t anything wrote down but I made songs in my off time,and around eight I started to write songs down,like little song ideas stuff,so everything came from that.

――Despite your father is guitarist, what made you more get fun into rhythm perspective or base style that what you do right now?

Topaz Jones : So my dad gave me a guitar when I was kid for christmas,and it was really hard, haha! And you know, he’s really good so I was kind of intimidated. So I was like,no!

――Hahaha. Do you write the music with the band called Late Night Episode?

Topaz Jones : Yeah,they were the main people I collaborate with for all of the songs of ARCADE,we still make music time to time but they didn’t join in the current album.

――When you want to record live sounds,do you play on your own or do you invite other musician?

Topaz Jones : There is a couple of songs in new album,I played guitar,but especially this album I thought it’s better I let other people in so I’ve been working with very talented musicians and producers as well who are like,really good drum player from texas and the amazing base player,I’ve been reaching out all of my most talented friends.I’m more like brain behind.

――When I listened to “Cotton Fields”, kind felt that is personal track from your home New Jersey. What made that approach?

Topaz Jones : It wasn’t anything I specifically set up to do,but my mam was selling thing and around the time we were getting to ready sell packing thing up,one of the last thing to leave was the piano.So in the time period I was doing a lot of voice memo trying doing practice.Once everything sold everything gone,I went back and looked over those voice memo,that one ended up really becoming stuck out of me.That also ARCADE is from same around period too.I always came back to that.

――The track “Coping Mechanism” back in 2013, that is kind of about vandarism and social theme behind it, and recent “Cotton Fields” is more personal, I see the two elements behind of your track making form. What makes you certain emotional range?

Topaz Jones : That’s kind of who I am as a person,I have a lot of thinking,my brain have a lot of ways,and I’m not person who get angry very often.I think Cotton Fields is closer to my base line.But especially even with the album finishing now,there is more stuff that goes back to Coping Mechanism kind of like, social commentary element.And that was side of me that I felt like,on ARCADE,I didn’t really get to address all of the topics,so now I’m doing that now. But I’m just, whatever I feel passion about. 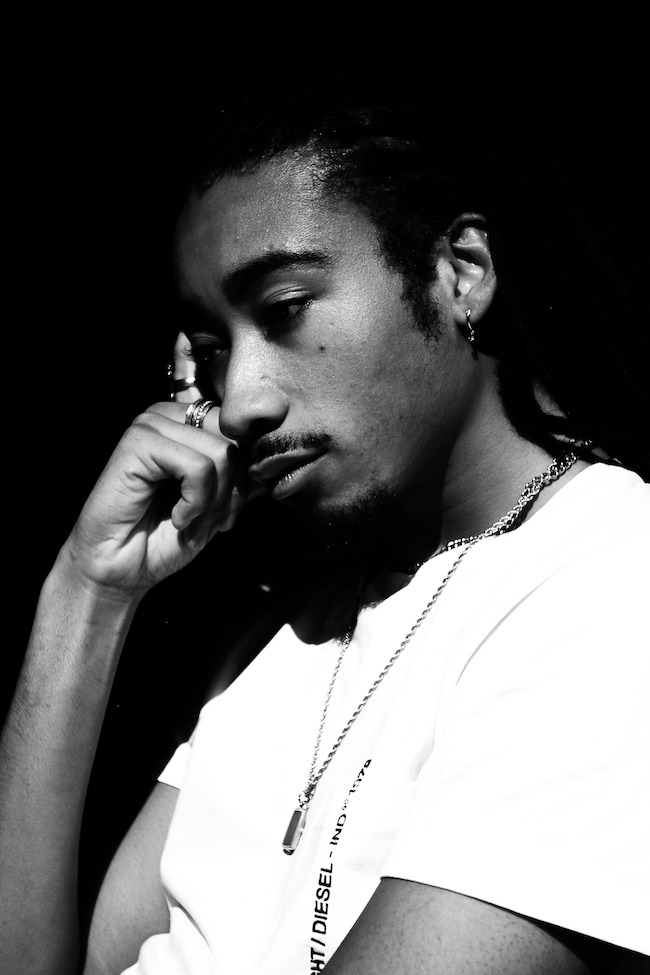 ――Music video behind of “Toothache”,directed by rubberband,how was that process?

Topaz Jones : In general,I find music videos to be stressful,haha.Because you try to get everything done,there is a lot of people.But I was really lucky that the two guys,rubberband they’re also my best friends they understand me really well and what I wanna do and how I represent myself as an artist.So it’s always dream working with them we’re just like a bunch of kids who kind went to college together and now able to make something like that.It’s stressful but also most fun thing,I can’t wait to do it again.

――Any plans of filming new music video for new project?

――Are you still not a social network guy?

Topaz Jones : Hahaha. Well.I have to be.You can’t really not be.But I look forward to the day when I able to go Frank Ocean.I think those guys left really nasty comment to me.People just leave me alone generally but today somebody this morning says sideway to me.And it bothered me for like an hour! And I was like, why I letting this person who doesn’t even have any pictures on instagram bother me? you know, it’s so silly.So when stuff like that happen,I’m like give me away from this.But now,I play the game.

――I see. So back then it was probably MTV and radio,right now we face to the era social network being the key element of spread out music,how do you feel about this modern way of way to sell music?

Topaz Jones : On the one hand,the artists have so much more control now than when my dad was working in music industry.Back then it was like everybody had to take really terrible deals and they didn’t get as much money,control,ownerships as well.And now,I’m very greatful with social media era has also come control and power to be artist.But I also think a lot of people kind of prioritized on wrong things,I read about article about how instagram removing the number of likes,and I actually think that it’s kind of doubt with that.Because even though I’m the person who maybe could be brand and show them like,hey this many followers give me money.I also think that if nobody,if you didn’t know how many people likes getting,that maybe you’d only be able to judge artists based on how much who likes the music.And I doubt with that because I’m the person who prioritized just making good music.

――So this is the last question.I believe that you really like to read books so very interested what you reading right now.

Topaz Jones : Not as much as my girlfriend do,though.Right now I’m reading Beloved,by Toni Morrison who just passed away actually.She’s one of my favorite writer,it’s unfortunately that took that for me to do it but I just need to start reading that book.

――Does your girlfriend advice you on artwork? 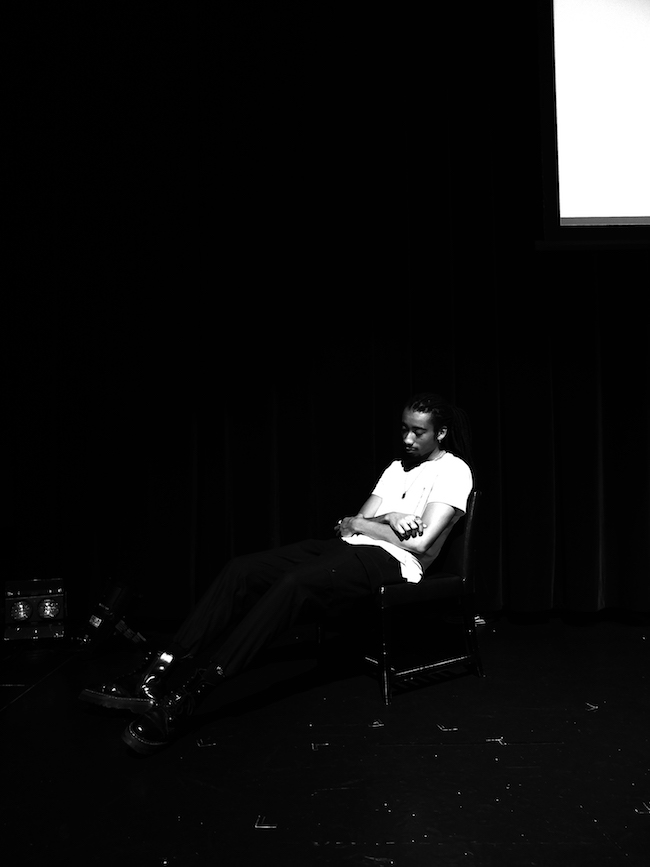