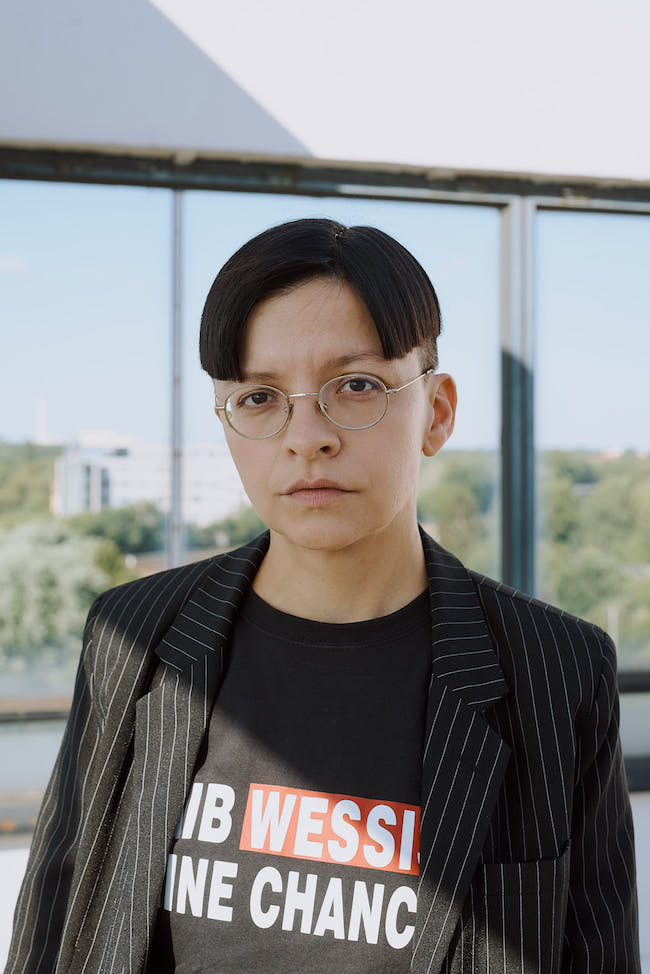 Age is just a number and there is no clear definition of being what is an adult and every person is different. We can’t define it, so everybody is looking for their own answers in life. 14 is a sensitive age. It’s when you start thinking about your own future, so we wanted to make a series of age 14. After the Tokyo and New York issue, we selected 15 people in Berlin who have very diverse background, different ages and professions for 14 Issue in Berlin.
Tenth interview is with German installation artist Henrike Naumann. Growing up in Eastern Germany she experienced the GDR herself as well as right-wing issues. She creates a critical space with vintage furnitures and engaged with us in a discussion about East German identity politics. We talked about her teenage years and what influenced her work on the rooftop of her Berlin studio.

Henrike: I lived in very, very small village near Zwickau (Saxony). My days focused on mainly school because it takes an hour by bus everyday. I realized I can do my homework at the school bus, haha. I always didn’t prepare my school stuff well at home and tried to sleep as long as possible. Then I was in a rush every morning. It was a bit chaotic. Also my room was very messy because I already tried to build a little set design. It looked like a crazy artist’s messy studio. My teenager cave. I was very happy, but also looking for harmony because my parents started to argue and needed to be there for my three younger siblings.

Henrike: Yeah. I think I was very adult inside but at school I was the complete opposite. Like a class clown. I was always the oldest and a good influence for my siblings at home but at the same time I had a lot of freedom as well. I always wanted everyone would get along with each other. 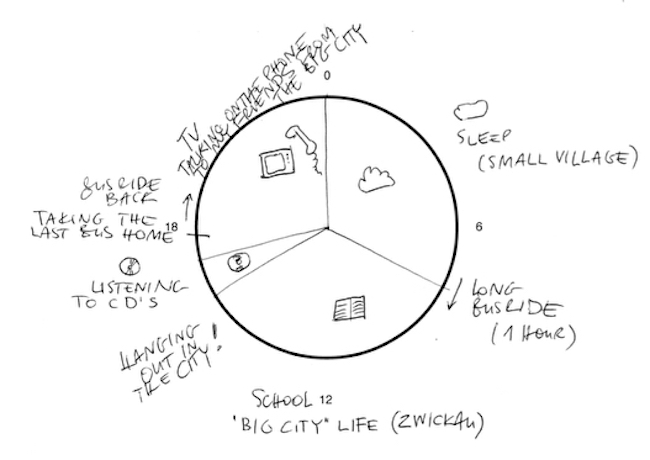 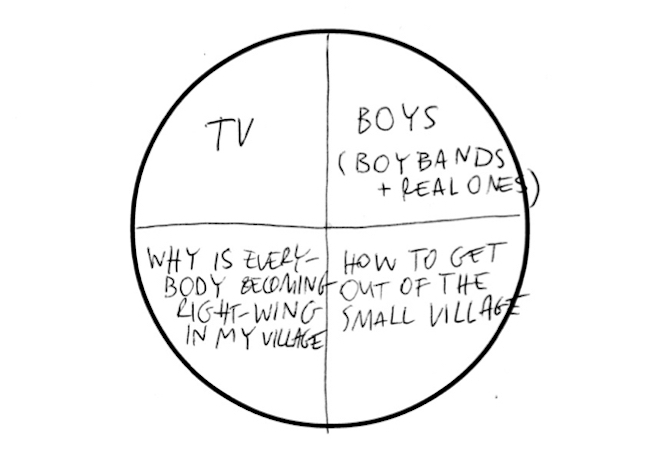 —Please tell us your most memorable moment at age 14.

Henrike: We had “Konfirmation” when we were 14. You could ask your parents for something special like money, a bike etc… Also I could meet my older friends from kindergarten in my village but realized they had changed a lot. Most of my male friends wanted to get a bomber jacket (MA-1). It’s a fashion style now but in the nineties It was a uniform of the right wing youth. I knew their faces since kinder garden but they looked totally different after they changed their style. They shaved their heads and wore these jackets and boots… I realized “Ok, I need to get out”.
Our village is close to Bavaria and a lot of professional right wing recruiters came to the countryside in the east… I really tried to engage with my friends to talk about it. I always understood that everyone has different opinions on all sides so I wanted to go into all aspects with my work. Be able to explain my work to someone who is very different, not only to an audience who might has the same feelings as me.

—It seems you were very close to political issues since your childhood. What did you want to do when you were 14 years old?

Henrike: It was not at the age of 14 but I remember that we had to draw our wishes for the future at school when I was in 1st or 2nd grade. No job that I knew appealed to me in any way. What should I draw…? I invented a job myself and pretended that I saw people doing it on a TV documentary that I watched with my mom at midnight. I imagined it to be a woman who’s living in a big house with a lot of windows where she has all different kinds of businesses and people can come and get what they need. For example house decorations or ice cream etc…

Henrike: Then my teacher said me “No, it doesn’t exist”, haha. All The other kids were also laughing at me and said “This doesn’t exist!”. It was so sad for me and I never talked about it again after that. But now I realize that I subconsciously worked very hard towards this imagined profession, and in a way I am doing exactly what I imagined myself doing in the future. 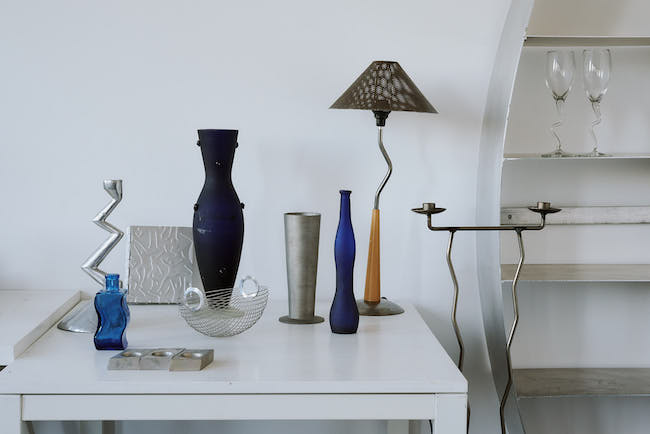 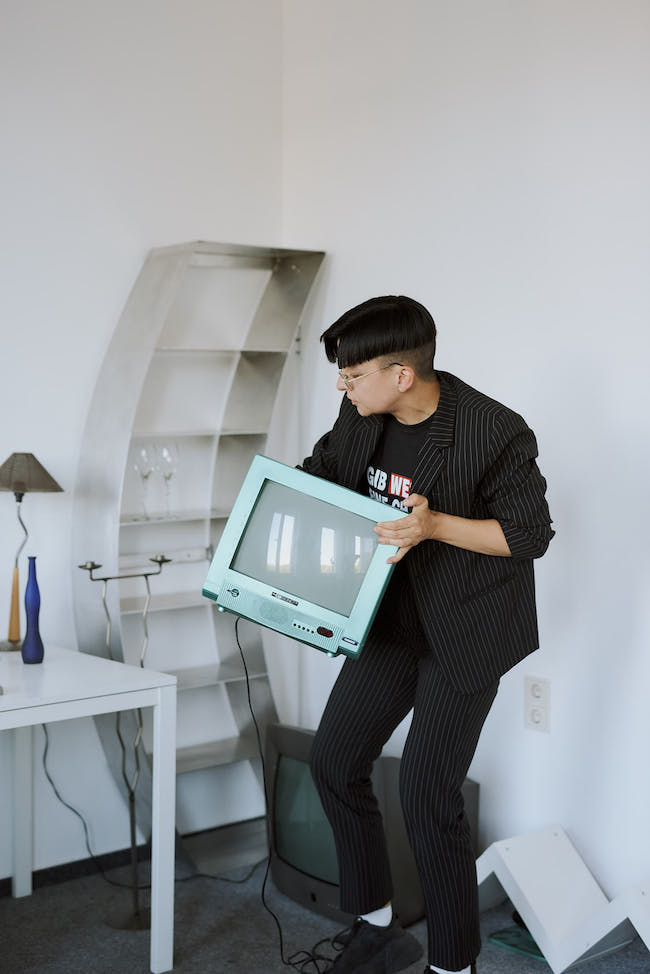 —Now you’re an installation artist. When did you start your artist career?

Henrike: In 2012. I studied scenography for theater and film at different universities all together for six years and started as an installation artist after that. It was a complete new field for me and I started from scratch. At that time, no one in the cultural field really cared about dealing with the right wing scene and I felt very alone at times, but people often said to me “keep on doing it”, “please don’t stop” and “It’s very important as a part of the discussion”. It was very hard for six or seven years because I couldn’t earn anything from my work. I turned 32 and thought that if there is no way I could pay for what I need to live I have to stop this kind of work and find a money job. Also the topic was very dividing. But I always heard the voice in my head – “please don’t stop”. Then 2 years ago I finally got my first scholarship and things changed. Then the gallery KOW asked me to work together and I could do my solo exhibition there early 2019. Now I can live from my own work and it feels very good.

—Good to continue and believe in your work! I think recently people are more interested in political topics and your work.

Henrike: Yes it was more of a niche thing before. Also it’s weird that suddenly people get it because now things are very messed up. Now people acknowledge the problems we have with the right-wing rise in Germany. 8 years ago, a lot of people said “art shouldn’t be political”. There is no art that’s not political.

—What hard things have happened to you since you started your work?

Henrike: What’s hard about doing this work and engaging in conversation with people is that even though there is a conversation there will probably be no solution at times. People don’t change easily. It’s hard for me when I see the limits of what I can do. Last week I had an opening in Chemnitz where the first visitor was a woman openly supporting the right-wing AfD. I was happy that even though she as very opposing political views she came to speak to me about it. But it also showed me the limits of what is possible in a discussion. 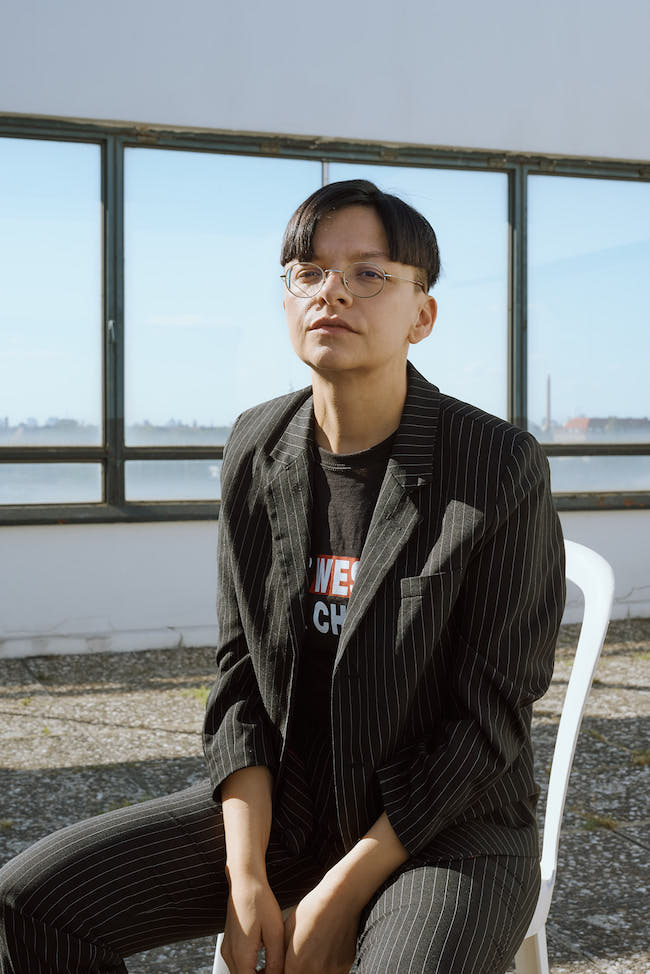 —What do you want to tell to young people when they look at your exhibitions and works?

Henrike: It’s interesting because I think my work reminds the audiences of something from their youth. I want to involve history as well as the present and make people realize what we’re doing right now and will be part of history one day etc…When you think about it I think it can motivate you to get active.

Henrike: I was very into US and UK boy bands. Especially Take That’s “Back for Good”. About one year later my taste changed drastically, and Nirvana became my heroes. And for TV: I watched “Takeshi’s Castle”, haha. Because I was watching American TV shows since the fall of the Berlin Wall but then “Takeshi’s Castle” was completely different.


Take That “Back for Good”

Henrike: Watch the news. I didn’t do it so much when I was 14, but it’s crucial to know what is going on beyond the own microcosmos.

—Do you have any upcoming news that you want to share to the readers?

Henrike: I have some exhibitions in Germany and Austria this year. A big solo exhibition in Hanover until 25th August. I have two more, one in Zwickau and the second one in Düsseldorf. They will start almost at the same time around the election. Vienna in September, Berlin and Munich in November and Leipzig in December. 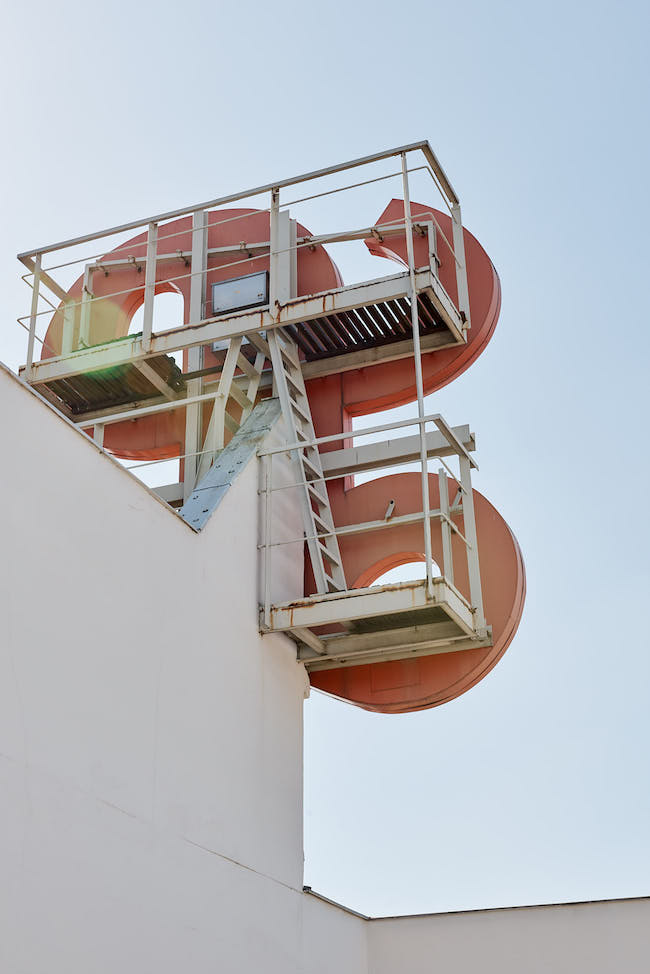 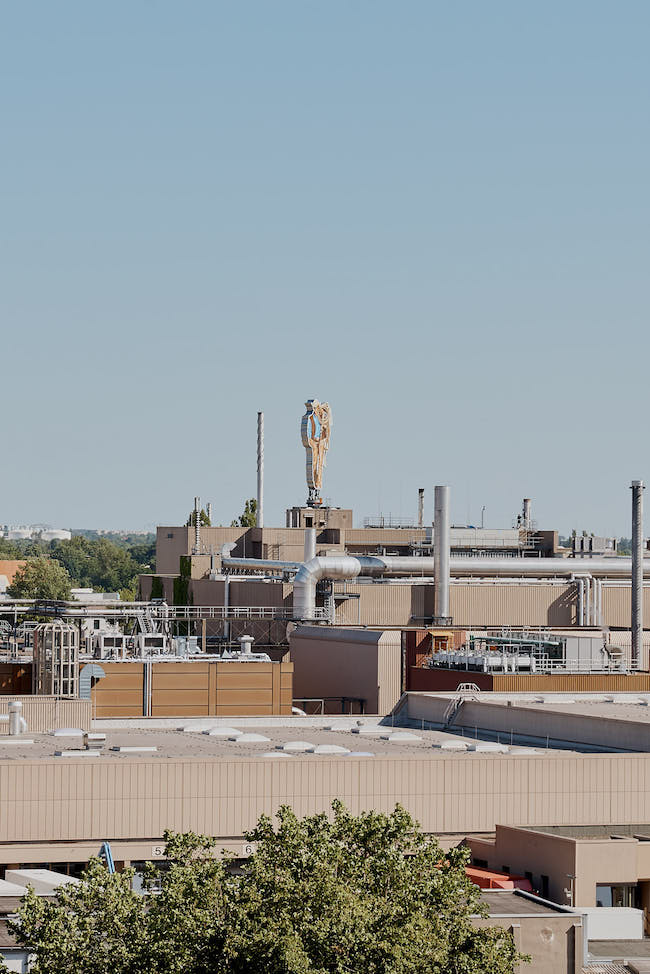 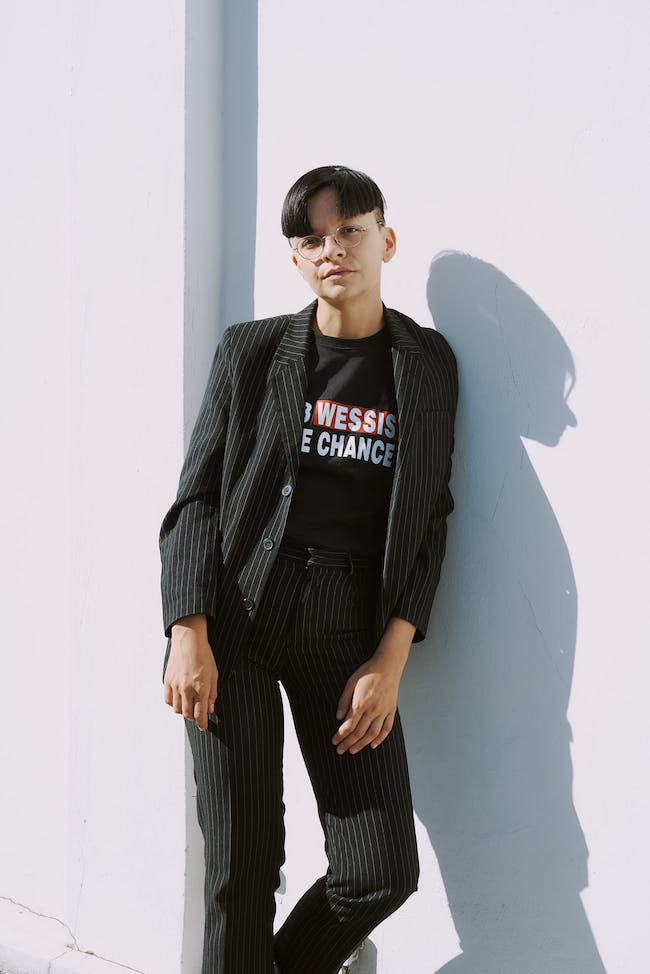