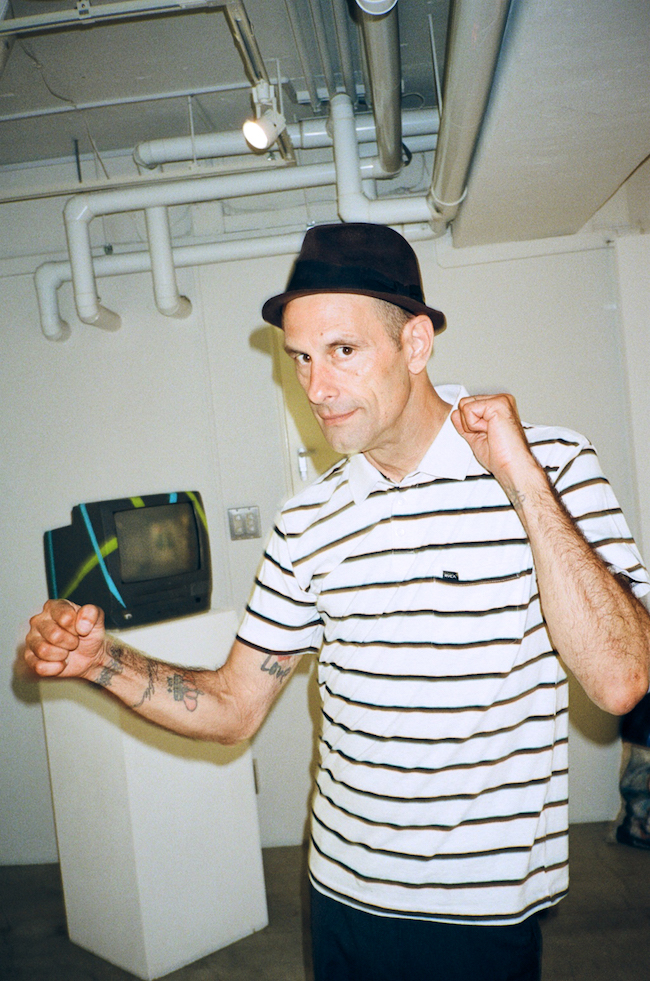 ――Welcome back to Japan!

Aaron Rose: Thanks! It’s good to be here.

――I remember when you brought the film to Japan in 2008. I can’t believe it’s been 10 years already. How are you feeling now?

Aaron: I know! It’s the 10-year anniversary of the release of the “Beautiful Losers” movie, but for all of us artists, it’s 25 years. The Alleged started in 1992, so 10-year anniversary doesn’t feel like such a big deal. Because we’ve all been doing this for 25 years since we were teenagers.

――How did you start the Alleged Gallery? Did you always want to run a gallery?

Aaron: [Laughs] Yeah, because nobody wanted a store there.

――That location must be very expensive now.

Aaron: I think $20,000 a month now. Nobody wanted a business there back then, because nobody would go there. So it was super cheap. We rented it basically as our house, but then it had this storefront. Me and my roommates, nobody slept in there, so I said “Let’s just do something in there.” Everybody was artist, so we just started having parties. 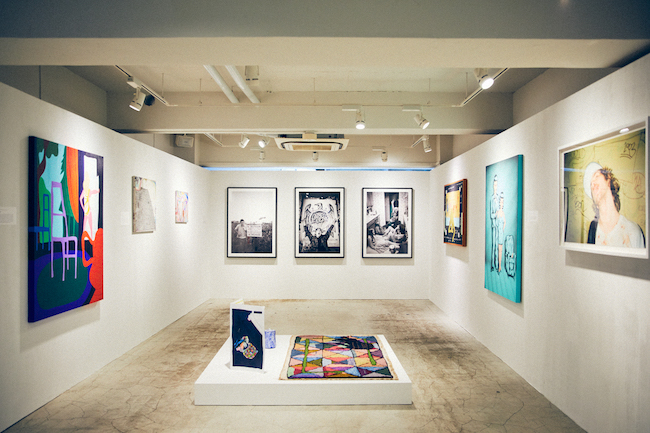 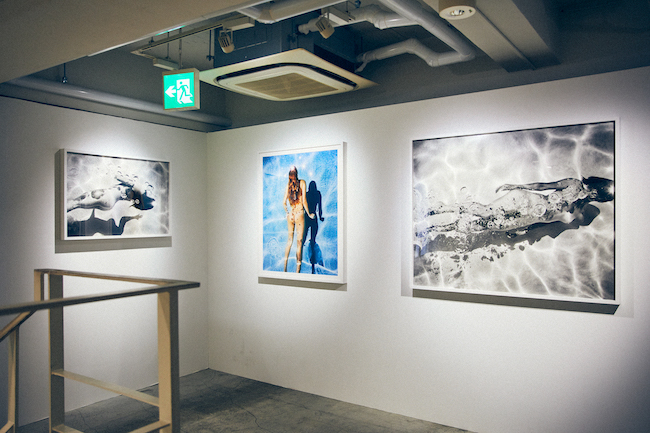 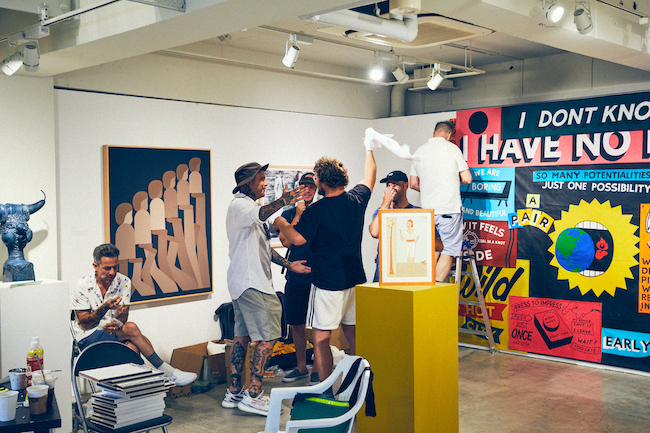 ――Why did you go to New York in the first place?

Aaron: I was in a band but we broke up there. We moved to New York and we were there for six months, and then we broke up. After that I was just working jobs, hanging out and not knowing really what was next.

――So back then you weren’t really thinking about starting this whole movement?

Aaron: No, it wasn’t on purpose. The galleries in New York, they are still like this, but they are pretty snobby and not really interested in younger artists, especially then. There was nowhere else to show your artwork.

Aaron: A lot of drugs, a lot of violence. We were friends with all the drug dealers. Heroin bags always had artwork on it for different kinds of heroin, so they would come to us and we would design their heroin bags [laughs.]

――How did the Alleged evolve as it was? 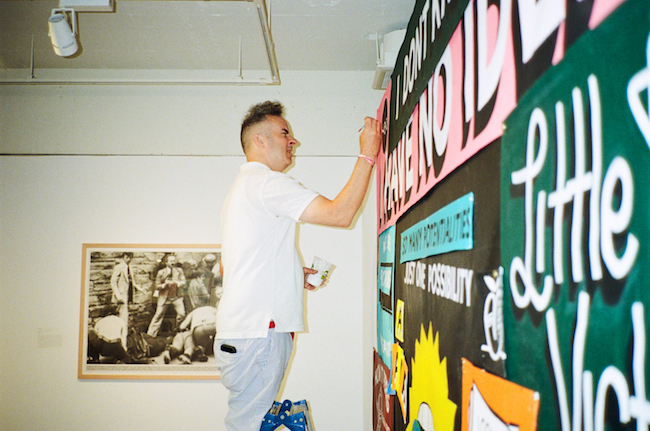 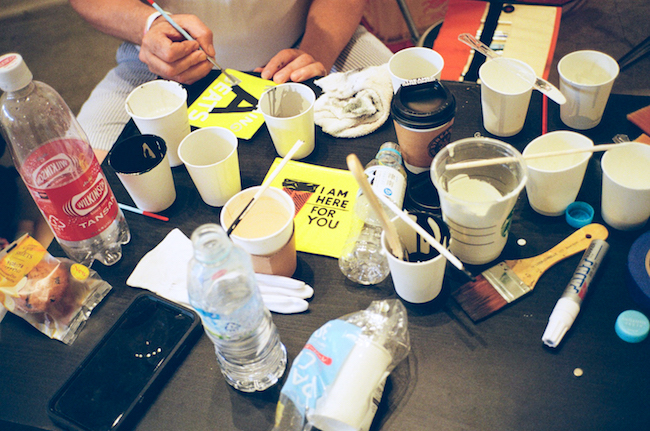 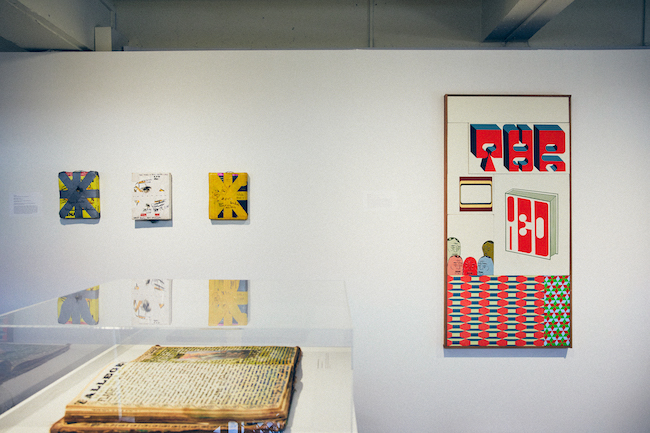 ――You had great artists show their artwork at the Alleged, such as Ed Templeton, Barry McGee and Thomas Campbell just to name a few. Were you guys all friends?

Aaron: Yeah and we knew of each other. And everyone would tour (for skating) so when they come through town, they would hang out. And it was like, “Oh I draw. Can I come back and show my artwork?”

――How did you guys get information back then without social media?

Aaron: Either on the phone or lots of faxing letters. I still have them. They are really faded now, but I still have tons of faxes.

――When did you know that you could run the gallery for a living?

Aaron: I think once people started wanting to buy things. But the whole first three years, I had a job at a shop called Little Rickey’s. I worked there from 11am to 6pm. And then from 7 o’clock till midnight I opened the gallery. It was never opened during the day, because there was Max Fish bar that opened at the same time next door. So when Max Fish opened, the gallery opened at the same time.

――What is your favorite memory of the gallery?

Aaron: Being stupid and not knowing anything.

Aaron: Yeah, too smart now. We had the gallery for about 10 years in different places because we had to move. Because the Lower East Side—partly because of us—got more trendy, we couldn’t afford the rent. And our landlords at the time were really crazy guys. They would murder tenants to get them out. 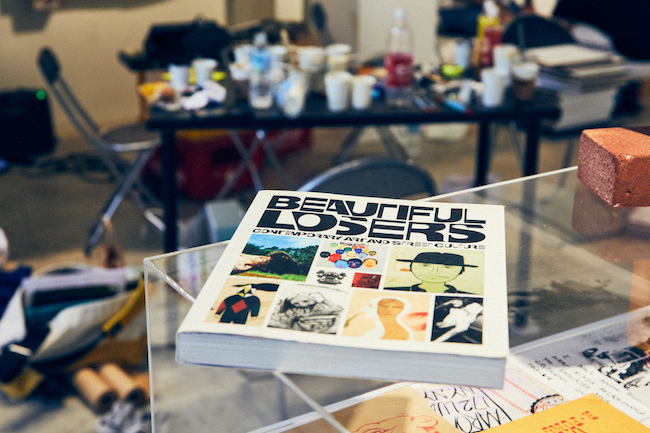 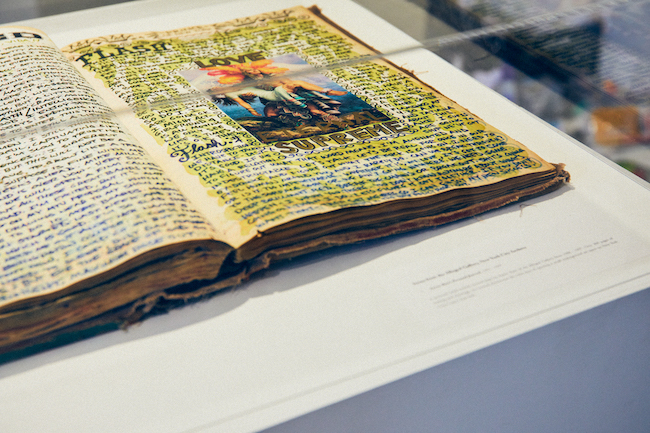 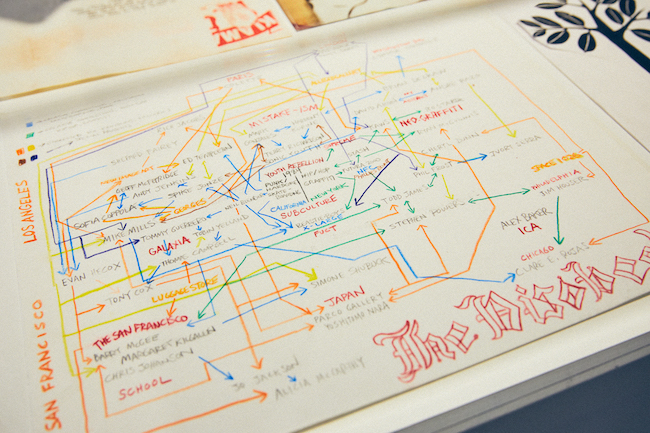 ――Last year was actually the 10-year anniversary of the film “Beautiful Losers,” and you had the show in New York. How was it like having everyone back together?

Aaron: It’s nice because we’ve all pretty much stayed friends over the years. And we don’t see each other very often because everybody has different lives. We just grew up and we were one bubble, and then everyone made their own bubbles and floated out. So we don’t see each other, barely ever. And there were people lined up every morning at the show.

Aaron: I think in Tokyo, too, because Japan understood this artwork long before even Europe or anywhere else. New York and Japan, really… So in New York City there was a real nostalgia.

――I think even more people in Japan got into your art because of the movie.

Aaron: I’m really happy we did that movie when we were all young. Because a lot of times with a documentary, everybody is old. They would be talking about it like, “Back then…” It was really cool to do it while everybody was still young. 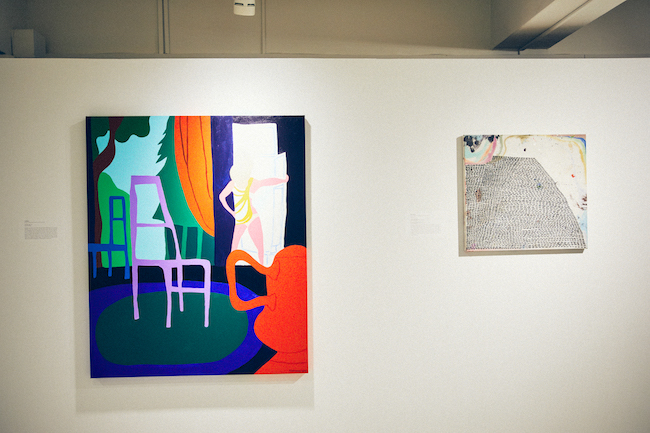 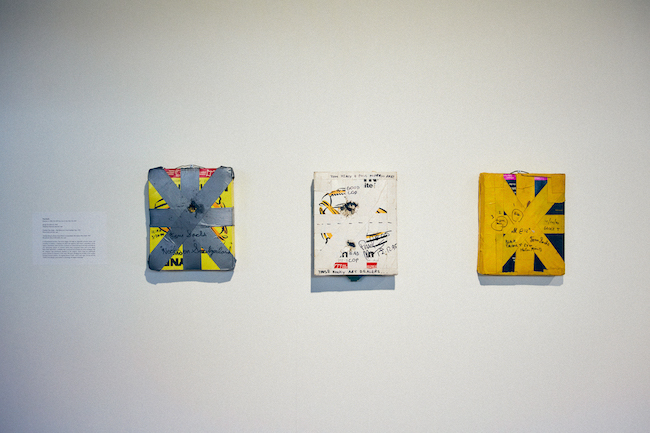 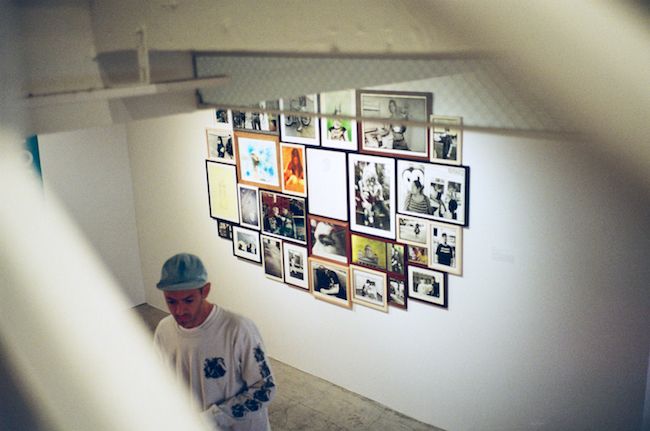 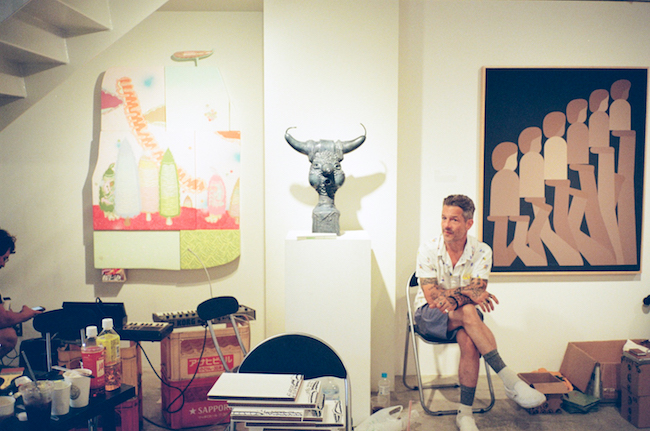 ――What do you think was the biggest change after the Alleged Gallery for you?

Aaron: Well, everything got big. And when it gets big, it ends up getting watered down, and like street art, I hate it. It started off something really small and very pure, and now it’s just like every street is covered with art in every city. And part of me likes that, there is more artwork that people are looking at, but there is no personality any more. That’s a little bit sad, but that’s what happens with culture, with everything. So you can’t be angry but it’s just become like, it’s not important any more.

――What is your biggest inspiration now?

Aaron: Not so much in art. I think the art world is in a funny place right now. It’s funny, me and ESPO were talking about it yesterday, everything swings back. And I feel like now we are about to spring back again, away from this huge money, huge commercial, huge art world that people are not going to like any more. They swing back to more personal kind of artwork, because culture always does this.

Aaron: So my biggest inspiration is that everything cycles. There is a big period of time, like maybe over last ten years, where nobody was really so interested in this “Beautiful Losers” artwork but only kids. Now the movie is taught mostly in high school. In high school art programs it’s shown all the time. So teenager generations are really into it.

――That is so cool. Do kids come up to talk to you?

Aaron: Yeah, and write letters all the time, and DMs on Instagram. But there was a weird time when this kind of style of work was not popular. But that cycles too. Like you see with everything, like all the sudden now everyone loves Grateful Dead, wearing Grateful Dead shirts. But for 20 years, “Grateful Dead!? Man, no way!” [laughs]

――Any advise for the young aspiring artists?

Aaron: Ignore the trend. The trend will always let you down. Just when you think you’ve mastered it, then everybody will be into something else. 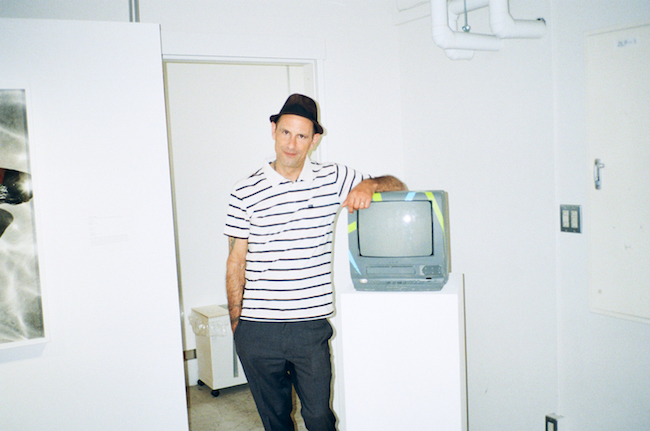