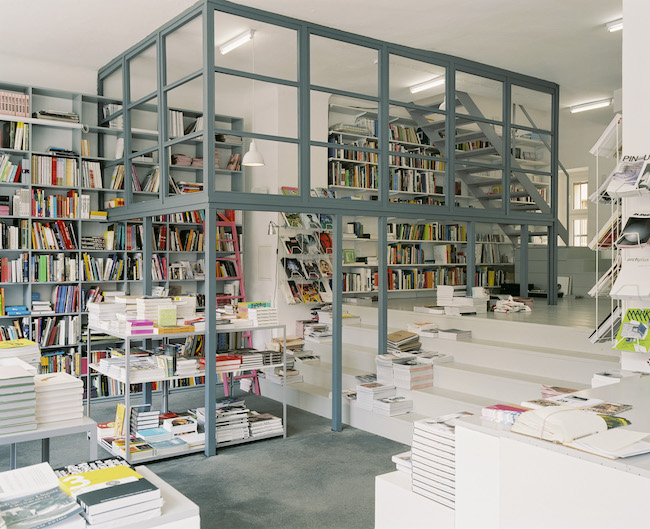 “Pro qm”, since it opened in 1999, from the center of Berlin, it has seen the city evolve and has brought discussions to the society. The interior layout, given the name “per square meter”, with carefully selected books grouped on the shelves according to their theme includes architecture, design, politics, and urban development. The selections are given extremely high reviews from creators and other bookstores spreading by word of mouth and people visiting the bookstore endlessly. When discussing about independent bookstores in Berlin, there was a need to interview this bookstore that stands as a pioneer. From the words of Katja Reichard, the co-founder and store manager of Pro qm, we can explore the scene of bookstores in Berlin through the past and now.

―― Can you tell us how you opened Pro qm?

Katja: In the early 1990s, I met the co-founders, Jesko Fezer and Axel Wieder, as artists. It was during the post-Collapse of Berlin Wall and reconstructions were taking place everywhere. While the city was experiencing rapid change, we were in a need of a place where we could execute cultural projects and have discussions. We chose the Mitte district as our base because we wanted to dispute in the center of this city. Back then, the Mitte district had cheap open spaces and after graduating university, I organized project spaces with my other friend friends. Then we decided to open “Pro qm” with three of us.

――Why did you choose to open a bookstore, rather than an art space?

Katja: The three of us had our main focus on “urban”. We would look into all the books related to it. Especially “If You Lived Here: The City in Art, Theory, and Social Activism (1991)” by an American artist, Martha Rosler was a very important book to us. It documented one of the 1990s huge social problems, homelessness in New York. We wanted to sell these important books, promote it to our community and other artists, which led us to start this bookstore. So, we sell our favorite books rather than best-sellers. The fact that this place is a platform for discussions has not changed. We learned how to manage the bookstore from our friend’s bookstore ”b_books”.

Katja: The rent for the previous place soared upwards by 4 times, due to the effect of gentrification, so we moved here in 2007. Currently, Jesko is a professor teaching design theory mostly in Hamburg and Axel is a curator based in Norway. Left in Berlin, I am the store manager and run the store with my wonderful friends.

――Pro qm is known for its involvement in activities that goes beyond the frame of bookstores?

Katja: Since it opened, we have been doing many presentations and art productions. In 2000, we were awarded for “Ars Viva”, an art prize, in the collaboration with the designing team, BLESS. This is an award given to new artists each year by the “Kulturkreis des BDI”. Pro qm was doing research on ”participation” in architecture, design, and city. After being awarded, we did exhibitions in 3 different museums in Germany. However, among the judges, there was a controversy over whether a bookstore can be included as art. To be honest, you can’t categorize BLESS as design or art. Same thing can be said for Pro qm. 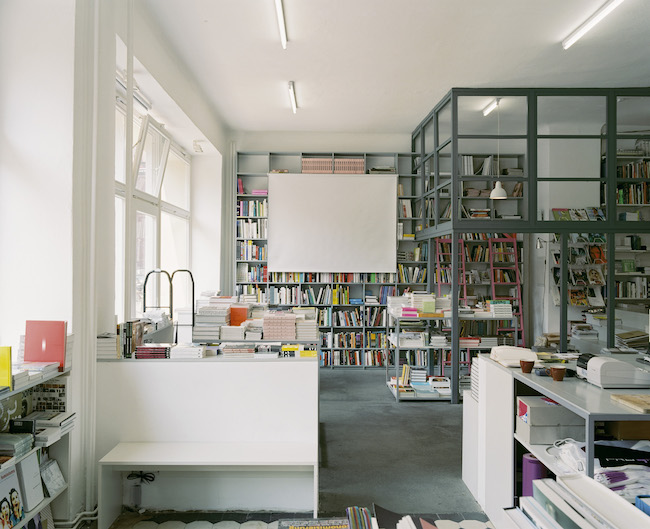 — I do feel that there is some similarity between BLESS and Pro qm. You are from Berlin, but how was the scene of bookstores like here?

Katja: Back then, there were independent stores. For instance, a queer bookstore “Prinz Eisenherz” and feminist bookstores, you can’t forget “Bücherbogen”, which all opened later in 1970s. Near my university, there was a huge bookstore “Kiepert” where I sometimes used to order English books.

―― Back then, there were English books sold in Berlin?

Katja: Just only a small portion of English book stores did, mainly it was German books that were sold. This was before internet: At Kiepert, there was a huge catalog like a telephone directory, where I would look and order English books. The system was, I find the author and title of the book, fill in a small card for ordering, give it to the staff and receive the book.

―― I find difference in period. I have an image that independent bookstores grew in the late 2000s.

Katja: Bookstores with their own speciality did increase. “Zabriskie”, focusing on nature and culture, or Israeli, Polish, Spanish, and Arab bookstores, it has become diverse. There are such bookstores that sell fashion magazines like “do you read me?!” and “ROSA WOLF. For ZINE, “Motto” is the one. While “Pro qm” used to sell fashion magazines and ZINE, we reduced the amount because these kinds of bookstores emerged. As you can tell, we are flexible.

――So you adjust yourself depending on the situation.

―― There are such things as electronic books, but what is your opinion on digitalization taking place in the publishing industry?

Katja: To be honest, I’m not concerned of it that much. For instance, when traveling, electronic books are more convenient. I actually have 1 or 2 for myself. But I often remember the page by its typography and visuals, so that’s difficult to do with electronic books. Also, as I feel like everyone will be spending the whole day in front of the computer, reading on digital devices will be tiring. While it may seem conservative, I like reading on the paper more. 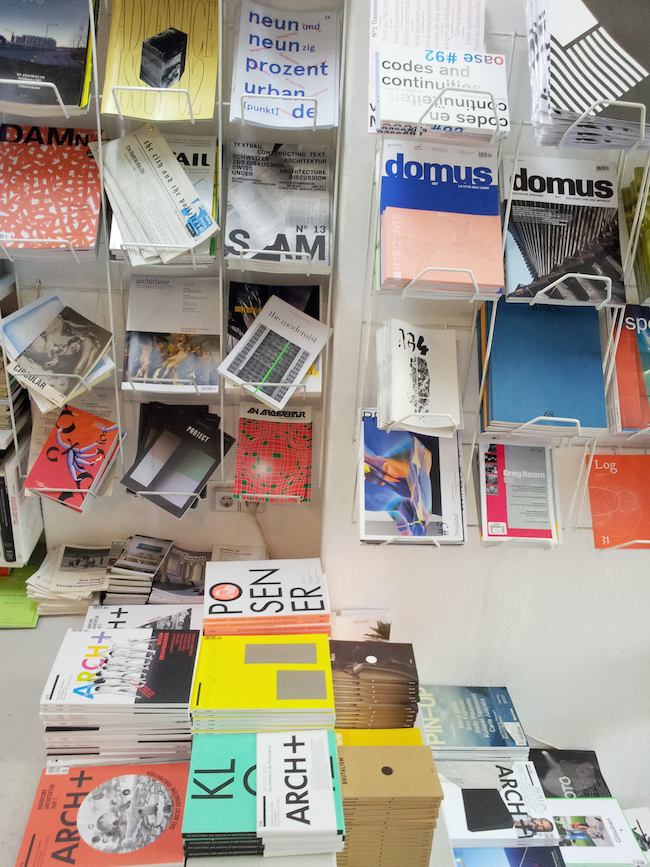 ―― While print medium is in a difficult situation, I have an impression that new independent magazines in Berlin are created constantly, from the bookstore’s
point of view, how do you feel about this?

Katja: I feel that it is because compared to other cities, the rent and the prices still are cheap. There is a possibility that you can concentrate on the project without having to find another job to pay the rent. Compared to the past, the process that takes place in publishing has become easier. That is obviously a good thing, but there is a chance that one will be satisfied with their creation and are not able to connect it to the next opportunity. If it’s in Berlin, delivery can be self-managed, but what will happen if it’s to another country? To ship a book, it takes time and costs money. So when deciding, there is a need to think of the distribution process thoroughly. At least 2 times.

―― That’s a very accurate advice. I saw you mention in the past interview that you love books too much that your task is to solve the overstock.

Katja: Yes, that is true. While saying you need to do management properly, don’t you want to leave your favorite books on the shelves? Other staffs point out that everyone has the book and this place is not a library, but I would love to restock them and that’s where I conflict over. For now, I am trying to decrease the number of books from the past and looking out for new published books.

―― Lastly, what kind of place is bookstore to you?

Katja: It’s a workplace and also a living space. I cannot imagine my life without “Pro qm”. I also like the fact that I don’t need to go out and see people because they will naturally gather at this place. Without rush, one can go in and out easily. It does not take much to get in and it’s open to anyone. 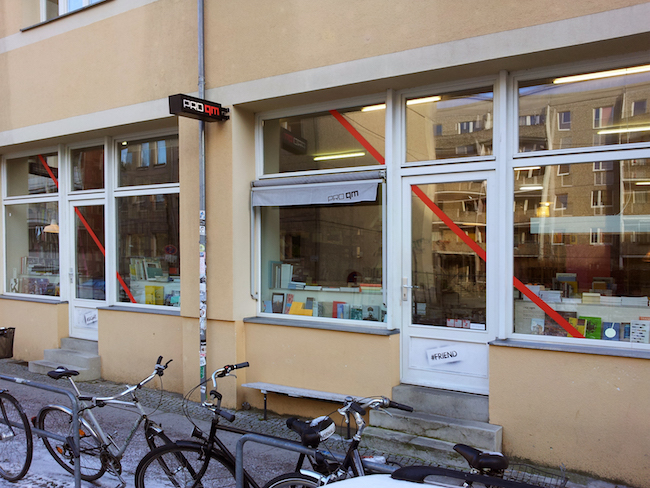