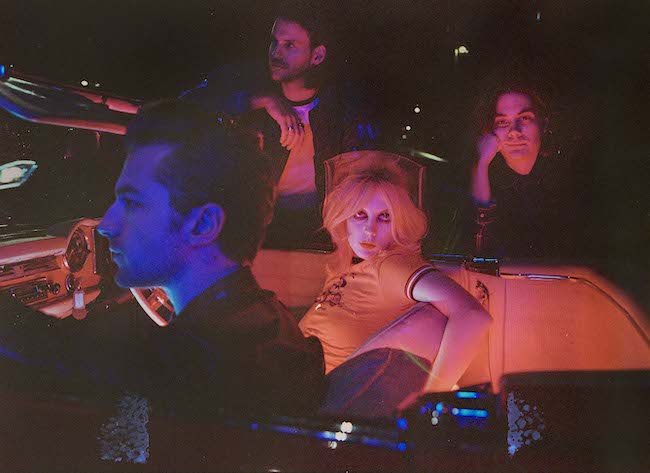 ―You guys came to Japan in 2016 for Summer Sonic. Do you remember what your experience was like? What did you feel was special during your visit?

Izzy : It was such a beautiful surreal experience, we stayed up late drinking whisky in secret bars, ate ramen every day and wandered around the sights. It felt like another world but at the same time familiar to things from home.

―4 years has passed now, and you’ve released your 1st album in 2018, supported Queens of the Stone Age, you’ve become the faces and soundtrack of Roberto Cavalli’s show, and I believe the band has gone through many experiences. What were these 4 years like for the band?

Izzy : They were WILD! We toured the world did 2 arena tours, got to watch some unbelievable live shows and Queen even turned up at our electric ballroom show. Sometimes it all just feels like a dream. Lockdown has been hard but we have made memories we will never forget!

―Please tell us what your impressions were for the Roberto Cavalli’s show.

Izzy : We had no idea what to expect to be honest, we arrived in Milan having driven from our French show and had one hour’s sleep. We got to the venue and There we were! A Warhol factory had been built as a set with black honey plastered across every wall! It was unreal. We got dressed in custom couture, they made me a pink Debbie harry inspired sequin mini-dress with matching retro boots! I felt like a rock and roll Cinderella! We had beers with all the models and peter Dundas invited us to walk down the runway with him at the end of the show! To finish off the trip we went to the Wes Anderson café in Milan for breakfast it was a ride!

―I also have the impression that Izzy represents the image of a band that is independent and has a strong core. How has the band dealt with the image that they have acquired over the past four years? How did it’s strength and emotions evolve and change?

Izzy : We always just try and be authentically ourselves. It’s so important in this world to not get trampled on artistically. Having an image is hard, we as people are always growing and evolving. Although, I feel at our roots we are retro rock and rollers to the core. Our friendship is what comes first and living for the moment runs alongside that. I want people to switch their phones off and dance with their friends in their bedrooms to Black Honey. 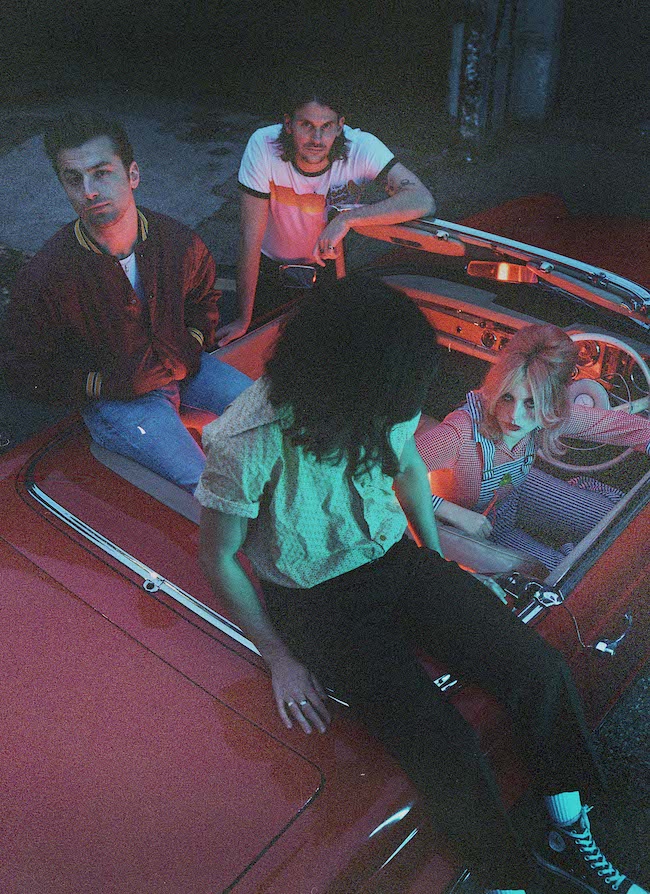 ―And now, the album “Written & Directed” is complete. The title already gives the album a very emotional impression. Why did you choose this title?

Izzy : It’s the most Black Honey album title ever! It represents not only an artistic autonomy but also a story and journey that we want to welcome you in to. I think we all just want to feel like we are living in a movie, don’t we?

―The band’s sound is thoroughly “raw” in every song. Is there a reason behind this?

Izzy : Yeah, we wanted to make it feel really real like you were in the room with us as everything was happening but at the same time sound like rolling credits to a memory.

―What is the difference from your previous album “Black Honey”? Both in terms of production process, and motivation.

Izzy : I guess we went “heavier” on this record which is closer to our roots I suppose. I’m so proud of everything we have made. Recording this record was a total blast and I would do it all again tomorrow. I feel pretty lucky to have come out of an experience like that and also love what we have made.

―Did the lockdown impact the production in any way?

Izzy : No, we finished the album just before lockdown thankfully! Although there is this song that I like to think was a premonition called “Disinfect” that I wrote in summer 2019 where the lyrics are weirdly relevant. “Disinfect the disaffected” is the chorus and I also say “we are just a virus, addicted to the violence” maybe I can predict the future? Or maybe we all deep down knew something like this was coming.

―Are there any collaborators other than the band?

Izzy : Yeah loads, for this record Dom from Nothing but Thieves helped on a song called Back of the Bar and I wrote I like the way you die with Carl Barrat from the Libertines and Olly from the Prodigy. I also write a lot with Mike Kerr from Royal Blood we did “Run for Cover” together.

―Looking at your music videos, the visuals seem to be a mixture of 60s and 70s psychedelic hippie style and gothic atmosphere. What kind of human figure, or artist do you portray on this album?

Izzy : I would say that’s pretty spot on. Someone said once that Black Honey is like Dusty Springfield having a meltdown. I kind of like that haha!

―Not only was the band’s wild side impressive, but also its ennui on “I Do It To Myself” and “Summer ‘92”. “Fire” also made full use of horns and other elements to create a more expansive tone. Are there any new expressions you were able to express on the album?

Izzy : Yeah, I loved all the brass arrangements. I don’t think many modern rock records are doing this sort of thing so I feel proud that it’s a part of what have made.

Izzy : Yes! I wanted to do a modern twist on the “summer of 69” feeling. I talk about 90s things like skating and listening to Nirvana. This song was like a collage of the 60s and 90s to me.

―Please tell us about “I Like The Way You Die”. It’s a very exciting song, including the roaring guitar sound and the lyrics. What thoughts/feelings did you put into this song?

Izzy : I love the idea of a female Villain. I think it’s beautiful and empowering. I like to deconstruct the way women are portrayed in the media and show them how I see them. Fierce beautiful and full of fire.

―The music video which features a number of women turned vampires, is also interesting. What was the concept behind this video?

Izzy : We wanted to create a video inspired by retro ham horror movies and “the Love Witch” where we explored female empowerment in a playful way. So, we made a coven of diverse vampires who all have their own flaws and beauty.

―What is the message you want people to feel throughout the album?

Izzy : I want people to put on their favorite pair of shoes stomp to work. Or Stand up to a bully in school or find their worth through a fierce song!

―What kind of year do you want 2021 to be, starting with this album?

Izzy : In a dream world, it would be loads of touring, especially Japan and the rest of Asia. I want to play all of the festivals we have been booked for in the past again! I want to kiss fans and crowd surf then drink in local bars with new friends all around the world.
You never know it could happen!

―Finally, a message for Japanese listeners.

Izzy : Yoroshiku! Come add us on LINE we are chatting to everyone! When Lockdown is over we are coming to play you the show of your life!!! Be READYY!!! We love you. 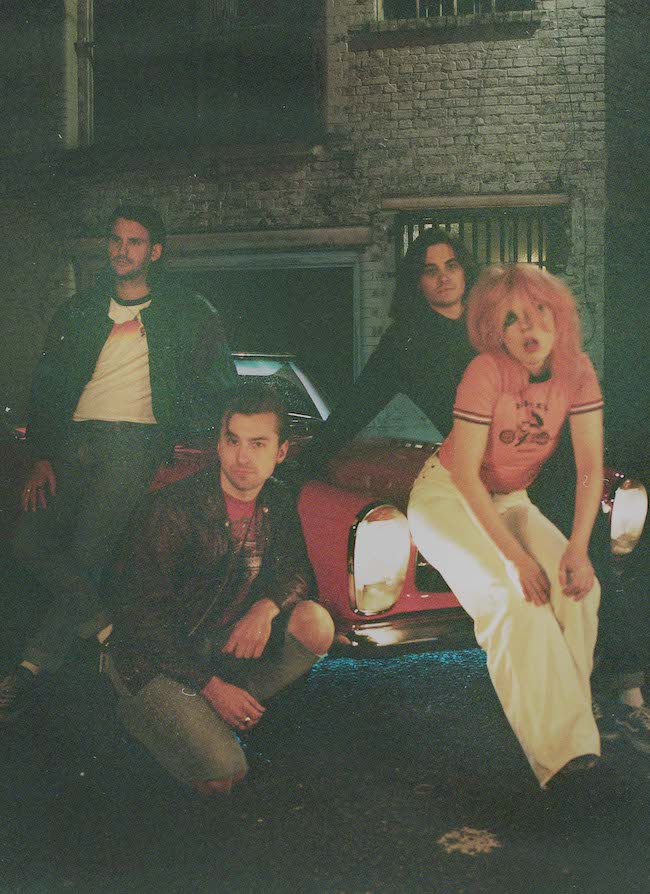