Interview with Aldous Harding about “Designer”／オルダス・ハーディングインタビュー 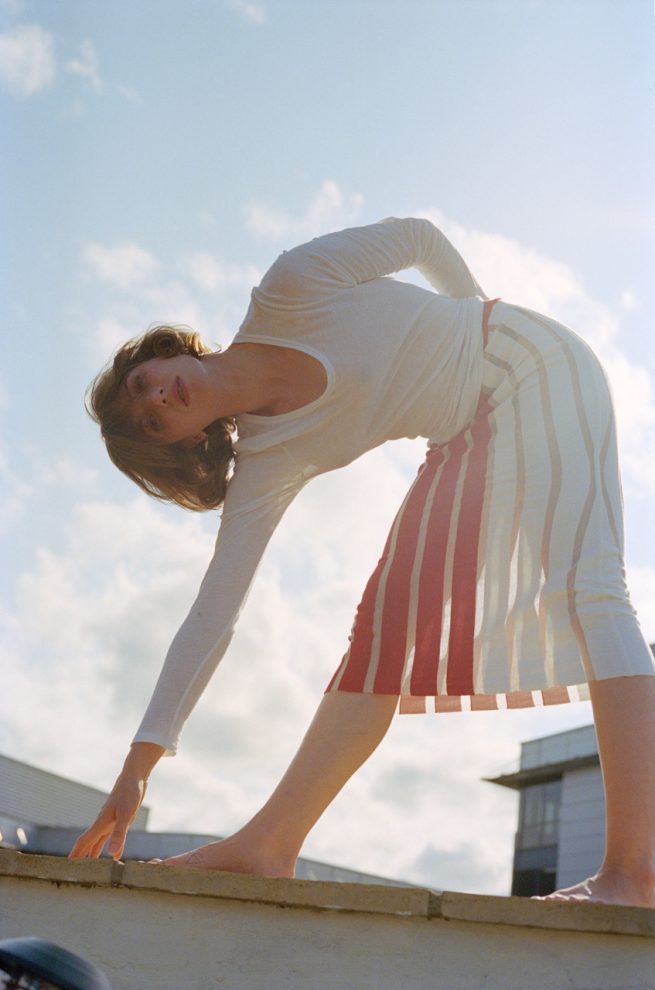 ーーI heard that the new songs from the new album ‘designer’ were written while you were touring which consisted of over a hundred shows. Looking back on that process what are some things or events that you remember in particular?

Aldous Harding: I remember going through the stakes for the first time and how warm and vast it felt. You know, the sky was different and everything was so much bigger. In terms of writing the songs, I don’t know. I remember writing ‘ heaven is empty’ on a train after four cans of beer that I was drinking on the train. I just sang into the window kind of drifting in and out of sleep, picked up my phone and then sang it into the voice recorder waking up the next day and I was like “ what is this?”

Well I remembered once I listened to it but little things like that.

ーーSo your last album ‘party’ was about a relationship coming to an end and it was full of heavy and painful emotions. Did making that album bring you any change or realizations?

Aldous Harding: I think that it showed that I could change in any way. I hesitate to use the word confidence because it was more of a handing over whilst also taking control somehow. I wasn’t sure about what was going to happen so I made it with everything that I had. Should it be the last and only time and in maybe that, maybe I was doing the same thing in my relationship. This is the thing, it’s difficult to remember certain things, it’s like sand in a towel. It’s there but you can’t work out how it got there.

ーーOn contrary to ‘Party’ what were some feelings that you had making the songs for ‘designer’? What was the important agenda for making the album and did the experience of making ‘party’ affect production of ‘designer’?

Aldous Harding: I realized in this interview, I’m trying really hard to be open and give the answers that I think that you will want but… I think in order for me to really answer them honestly, it’s not that I am being dishonest but it takes a little time for me to figure out and filter through all the noise in my mind to get to what I’m trying to say and I’m aware that, the silence can be…. but I don’t want to necessarily say things that aren’t true or right so I might take a little longer because the thing about me is that I don’t believe that I am a true eccentric. So when faced with questions about what were you thinking and what were you feelings, a lot of that stuff I’m unsure whether I’m having to conjure it up or if it is already there and I am being forced to look at it because of my job and the expectations. Which I enjoy because without expectation, I would just sit still and if it was up to me, I wouldn’t move. I made ‘designer’ because it’s my job. The way I made it came from a looseness and I didn’t want to rely on intensity and I wanted people to feel ‘included’. Included in a softer more celebratory way.

ーーThis is your second time working with John Parish. What were some things you considered important during the recording and mixing process.

Aldous Harding: I was all pretty important.

ーーSo the music video has a mysterious feel to it. Can you tell me if there were any stories behind making the video ?

Aldous Harding: Well ‘The tunnel’, I later figured out doing interviews that when I was younger I went to a fun fair with my father and I must’ve been three and there was a women telling fairy stories and a huge tent made of cloth and to get in there you needed to crawl through a tunnel that was then burst down to this open space covered in silk and she was sitting there and telling stories. So I think that is where that imagery came from. Because I do just sit down and close my eyes and listen to the song and it does come pretty quickly to my mind and stuff and that’s what happened. As for the costume that’s just taken from an image that I found on the internet and I thought “well if I’m going to just be standing there then I want to look great.”

ーーThe song ‘damn’ has a thrilling title. Can you tell me how the song was made?

Aldous Harding: When we got to the studio, I had kind of have been dishonest about how many songs I had written. So I had said that I had enough songs and when John kind of figured out and revealed that I didn’t have enough songs, he told me that I needed to write a few more songs as safety. So I sat in the studio at Rockfield and it was so difficult to leave the songs that were already written in there and trying to build those and then create something else and everyday I would sort of go home defeated and say to John ‘Tomorrow, I’ll have something’ and then I get distracted and start doing something else and then the next day he’d day ‘we’re going to do that song today’. And then I would say ‘Nearly there, nearly there’ which was a total lie and I think it was the day before the last day, I had to sit down and I had to finish it and it took me all day and yeah that’s one of my favorites.

ーーI was listening to ‘designer’ from the audio link sent from the label and when I heard the album on the second round after the first, I was surprised at how your voice had such a different impression from ‘pilot’ to ‘fixture picture’. I think they are various characters coexisting in Aldous Harding’s vocals. If you were to mention three musicians who were essential to you in influencing you as a singer, who would they be and can you also tell us why?

Aldous Harding: Not really. Things just stick and everything that I do is from somewhere but I want to avoid things like comparing. It’s not that I don’t have heroes, it’s not that but creatively, I don’t channel anybody. I don’t think that name dropping is the way that I want do it. But Neil Young is a musician that intrigues me the most and always has and still does. I’m pretty open about that but it all goes in and some of it comes out.

ーーThe next question might be a difficult one again. What kind of music were you listening to a lot whilst making this album and I’m interested in knowing what kind of songs you would include if you were to drop a playlist with this album.

Aldous Harding: I was listening to, I have horrible memory and huge gaps in my memory. And sometimes when I do these things its a huge panic to try and give you the truth so I actually don’t remember.

ーーYou as a lyricist. Who are some people or artists that you would say you are influenced by ?

ーーWas there any music that you listened to lately or any books or movies that impressed you?

Aldous Harding: I really love Richard Brodhagen, he’s very good . ‘The masters in Margarita’ is an incredible book. Joan as police woman , I’m very impressed by. I think that she is very interesting and very strong. New music, I don’t pay too much attention to but yeah, Joan as police woman is my gal at the moment.

ーーI think you change your visual presentation for each album. For instance your costume and makeup. can you tell me if there was a visual concept or idea that you had for ‘designer’?

Aldous Harding: After the barrell I didn’t see any harm in there being a kind of light continuity with the videos and so it’s not like I had a big plan but it wasn’t like I didn’t have a plan either. It must’ve been some kind of innate intuition. I suppose because it does work. In terms of the artwork, I wanted it to be very simple and elegant. The word and my face was all that was needed really. I think it’s perfect. I struggle to remember how it all came together because I was doing it you know? I feel like I’m being asked to show pictures on my phone that I just didn’t take because I was doing it.

ーーThe song ‘heaven is empty’ is an interesting title. Are there elements on this album that reflect your past experience or personality, religious views or philosophy?

Aldous Harding: So obviously my past experiences will be a part of anything that I do like it does to anyone. I suppose, ‘Heaven is empty’ could be quite self explanatory in the sense that there’s this person that is not convinced that there is purpose or that they’re not interested in finding it I suppose. Things that you would expect somebody to want just falls through your fingers and that it’s just a turning away like a 180 away from something. I suppose they felt as though they had seen enough. I wouldn’t write that way if I thought I had reason to turn away.

Aldous Harding: Always wanted to go to Japan. I can’t believe that they are going to take me there. I’m only there for four days, so I don’t know what the plan is but the things that I want to do, I certainly won’t have time but I’m just interested in meeting the people and seeing the reactions to the record and us. It really is a little dream coming true.

ーーThere’s a famous quote by Bob Dylan that goes something like ‘if you want to know what’s going on in the present times you need to listen to the music of that time’ If the same applies to your music what do you think ‘designer’ is reflecting of present times?

Aldous Harding: I feel like there’s a lot of pressure on everybody to know what they are, know what they stand for and to have purpose and carry some kind of purpose on their backs. I think it’s a lot of pressure when so much of it feels, out of our control and that you don’t have to explain if your intentions are good. And I know that’s not necessarily a popular opinion but as long as your intentions are good. ‘Designer is like a full stop, it is what it is. Just an open unapologetic effort.