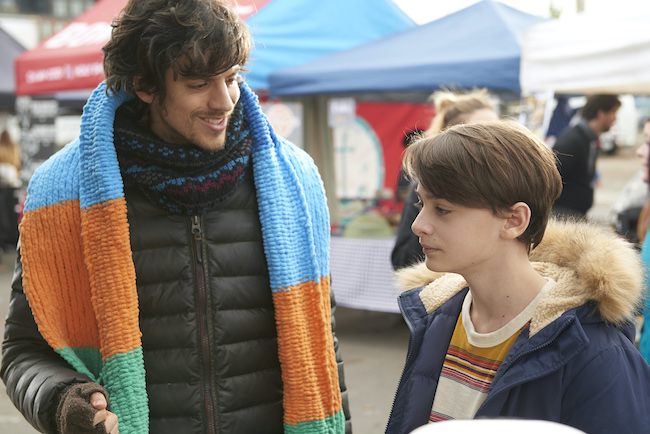 –This film talks about various themes such as social issues, religion, finding your identity and so on through food culture. Why did you want to tell this particular story?

Fernando Grostein Andrade: I have an older brother, Luciano, and he raised me because I lost my father when I was ten. And when my nephew was born, my brother wanted to give him a DVD about traditional Jewish holidays. At the time, I was a little bit worried because there is a lot of religious wars. Then a friend of mine gave me a book by Joseph Campbell called “Thou Art That: Transforming Religious Metaphor,” and it opened my eyes. He says that the problem is not the religion itself, but when people look at religion in a literal way. For instance, if you think about the Promise Land as a metaphor, you would say, “What should I improve to be in this place and elevate my spirit?” But If you think about the Promise Land as a physical piece of land, you might be ready to die and kill for it. Then I started thinking, “OK, what do I want my nephew to learn?” and that’s how I started working on this film. By coincidence, I started working on it when he was four and the film got ready when he was 13, on the day of his Bar Mitzvah! [laughs]

Fernando Grostein Andrade: Yeah, but it was a coincidence. I wanted to make something that would send a good message for people in general, to be themselves and not what other people want them to be, and find your own voice.

–Why did you decide to do that through the eyes of a 12-year old?

Fernando Grostein Andrade: I think the Middle Eastern conflict is one of the most complex issues in the world. And when you look at the conflict through the eyes of a child, you can get away with having to explain all the heavy stuff. You are able to take a fresh approach from zero. Usually, the love between grandparents and grandchildren is one of the most beautiful loves, you know? So I thought that by accessing this love and having this fresh approach, it would be something that provide a new opportunity to discuss this issue. At the same time, while we are discussing the Middle Eastern property, we are discussing something bigger, something which is about how to deal with deep conflicts about identity. Because both Palestinian people and Jewish people went through a lot, so it’s a kind of a dilemma. Also, Abe has a mentor named Chico played by Seu Jorge, and as a Black Brazilian immigrant, he suffered a lot as well. So this way, I was able to set up a war which is really close to a real war, and you have people with big dramas. How can his identity blossom between that?

–By watching this film, you can see how food represents many things such as comfort, expression of love, memory, communication, etc.

Fernando Grostein Andrade: I think food is a foot print of who we are. One of the deepest emotional memories we have is when we were a child, when we were sick, and our mom cook something for us. It becomes comfort food that whenever we are sick, this food has magical power to heal, you know? So I think food is a beautiful metaphor not only for love but for identity. Because the food we are used to eat is usually the food our parents and our grandparents raise us with, and they tell a lot about who we are. And it was such a beautiful opportunity to show that people with different backgrounds share the same ingredients. Sometimes they share the same food even though at the same time, they are super different people with different identities.

–Why did you decide to cast Noah Schnapp to play Abe?

Fernando Grostein Andrade: I saw Noah’s work from “Stranger Things” and felt that he was amazing. We did a casting and his audition was really really good. He was incredible. He is such a professional actor even though he is a child. For instance, he was in 95 percent of all the scenes and never ever forgot a line. This is a very low budget movie and we shot it in 18 days. We had a lot of pressure on the set. And Noah was always emanating peace, calm, focused… and it was so important for the crew.

–I’m a big “Stranger Things” fan, and I was surprised how much he’s grown in “Abe”!

Fernando Grostein Andrade: Yeah, I’m afraid he is bigger than me [laughs.] We had his 13th birthday during the rehearsals. I think he just turned 16.

–This film made me very hungry. Did you try all those dishes in the film?

Fernando Grostein Andrade: Yes, I did try. One of the foods I liked is the fattoush salad which is Lebanese salad. But instead of fried pita, he uses matzah. I tried it and it was really good.

–You are a filmmaker as well as YouTuber, and you also write for magazines and newspaper. I read that you are a big inspiration for next generations in Brazil. It has been such a crazy year that nobody expected. As a creator, what have you thought about or realized during this pandemic?

Fernando Grostein Andrade: I think everybody was forced to reflect and rethink about our lives this year. There must be a good side out of this where everybody is reviewing their habits. Some people are quitting jobs they don’t like, a lot of people are studying, a lot of families are reconnecting because they are spending time together. Even our dogs, they are super happy because their owners stay at home the whole time [laughs.] So I believe in 2020, everybody is preparing to release a stronger arrow next year. I think that should be the biggest consequence of all of this. Everybody is in a lot of suffering, a lot of reflection, but a lot of growth and improvement will come out of this.

–How do you feel about releasing this film in Japan?

Fernando Grostein Andrade: I’m very honored. I’m super sad that I’m not in Japan. Because over ten years ago, I spent a month in Japan filming a documentary about Caetano Veloso who is a Brazilian musician. We went to Nagoya, Kyoto, Osaka and Fukuoka, and it was such an amazing experience. I wish I were in Japan at the movies spying the audience to see when they laugh and when they get emotional and having fun. But I’m happy that the movie is going to be released and that’s the most important thing.

–I wish you were here, too. Lastly, would you like to send any message to the movie-goers in Japan?

Fernando Grostein Andrade: I would like to invite and provoke Japanese people to educate and inspire the rest of the world. It was amazing when Brazil hosted the World Cup, Japanese fans were the only ones who cleaned the mess after the match. And I remember when I was filming in Japan, my crew forgot the wallet on the subway but he was not worried. On the next day, he went back and the wallet was at lost and found! In Sao Paulo or New York, it would be impossible. So I think Japanese culture has so much to offer to the rest of the world that’s so important. I just would like to provoke Japanese people to share more of the wisdom with the rest of the world, because we do need it [laughs.]