Age is just a number and there is no clear definition of being what is an adult and every person is different. We can’t define it, so everybody is looking for their own answers in life. 14 is a sensitive age. It’s when you start thinking about your own future, so we wanted to make a series of age 14. After the Tokyo and New York issue, we selected 15 people in Berlin who have very diverse background, different ages and professions for 14 Issue in Berlin.
Fourteenth interview is with British record producer and musician Mark Reeder. He left his birthplace Manchester and arrived in West Berlin in 1978 and quickly became engrained in the local community. He continued to make efforts in the early electronic music scene and DJ culture in Berlin and across the world. In 2015 he was the face of hit documentary “B-Movie: Lust & Sound in West-Berlin 1979–1989”. We interviewed him about growing up as a teenager in Manchester including lots of music and passion.

Mark: I was 14 in 1972. It was the dawn of glitter (the precursor to glam-rock) I was into Roxy Music, Gary Glitter and David Bowie, but I also listened to a lot of what was considered then to be progressive rock too. I was a very alternative kid. I was constantly being bullied at school for being different and liking different “weird” music and dressing differently (at school we had to wear a uniform, but I would adapt it the best I could with army uniform stuff). I was called all kinds of names and the class would always do everything they could to humiliate me. They made me class speaker because they thought it would embarrass me, but what it did was to make me harder, more resilient and confident. I hung around record shops, read books and made model aeroplanes, while they all played football. 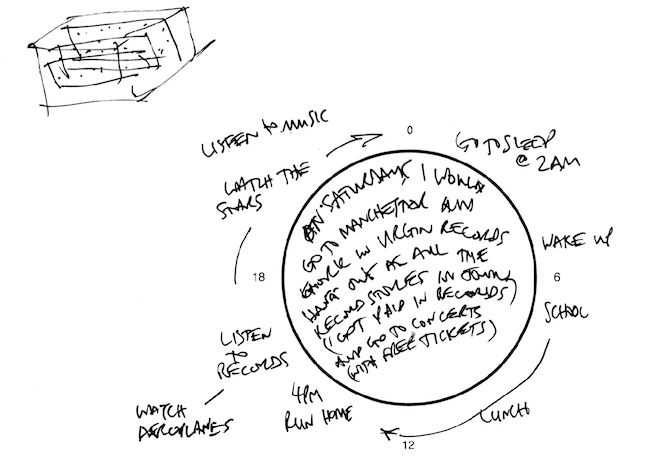 Mark: My first gig. Secretly going to see Roxy Music on a misty Thursday night in November at the “Hardrock” in Manchester. I had gone there after school and asked the bemused roadies if they needed any help and I got a free ticket. I told my mum I was going to a friend to listen to Roxy music, then caught the bus into town. Being a teenager, I just stood hiding in the shadows in my school uniform, watching how the people behaved. I felt so out of place in this abstract adult world. I had never seen anything like it. Everyone seemed drunk. A few fans were dressed up in complete glitter gear, platform shoes, dyed hair, make-up. It was a bit like pantomime. They hogged the front of the stage dancing and screaming at Bryan Ferry. Eno was also playing with Roxy then too. It looked like he had multicoloured hair and wore feathers and fur and he looked like an alien. I was fascinated by them.

Mark: I was thinking about going into the Royal Air Force and I joined the Air cadets, just so I could go flying. There I learnt about military discipline and how to shoot and march and the best bit, I got a uniform. After seeing Roxy Music play live though, I realized I wasn’t going into the air force. I wanted to become a graphic designer and design record covers and adverts instead. —You worked at record shop at first. How did you start your career?

Mark: I would check out Manchesters record shops all day on Saturday, scouring them for old rarities, or listening to new music. The recently opened Virgin record shop became my favorite shop, as I got on with the people who worked there, they would suggest records to me and I would spend all day in that little shop. Eventually, they asked me if I could help them out. At first, I got paid in records (which was worth more than any money they could have given me, because they knew I would have bought records with any money anyway). By 1976 I was working there full time. After leaving school, I went to art college and learned about the psychology of advertising and how to become a graphic designer. I worked very briefly for an an Ad agency, but hated it and went to work in the record shop. I knew the Ad world was not for me.

—Also you were a member of some bands then.

Mark: I joined a band “Joe Stalins Red Star Radio Band” we never did any gigs. We just practiced in my friends front room. He only wanted to play cover versions of freebird or stairway to heaven. I left the band, then Mick Hucknall my friend from art college asked me if I wanted to start a punk band. We called ourselves the Frantic Elevators. We did a few gigs, but by 1978, I had decided to leave the band and travel about Europe for a while, buying obscure records along the way. I ended up in Berlin and never left. —What good and bad things have happened to you since you started your work?

Mark: Life has its ups and downs. We all need to go through these situations in life because these are the things that define us and everyone does. I’ve had loads of good things happen to me and loads of bad and loads of things I thought would be good but turned out bad and things I thought would be bad but turned out good. No risk, no fun, no adventure. For sure, some people can handle the downers better than others and we can all handle the uppers. It’s just about how you deal with the bad when it comes. The bad things should make you appreciate the good things. For me, success is not about how much money you make, or what kind of car you drive, it’s about how you get around life’s obstacles that counts. I think I have had a quite adventurous life when I look at it, full of ups and downs. Yet, I feel very privileged to have lived through the music of the 60s until today and that I can still find great new music from all over the world, from bands like STOLEN from China, or the brilliantly talented Max Morrison from Manchester, or Zach Starkey from New York or A-Bee from Japan.

—What kind of music did you listen at age 14?

Mark: The kind of music I usually listened to was stuff like Roxy Music’s first album, ”Silver Machine (1972)” or “In Search of Space (1971)” by Hawkwind, “Hunky Dory (1971)” by David Bowie, “Raw Power (1973)” by Iggy and the Stooges, “Kick out the Jams (1969)” by the MC5, “Transformer” by Lou Reed, “Children of the Grave (1971)” by Black Sabbath, “Deep Purple in Rock (1970)” by Deep Purple, everything by Led Zeppelin, Hendrix, Pink Floyd and Gong, but I also listened to poppier things like Garry Glitter, T. Rex or even some Northern Soul or The Temptations, and I discovered Krautrock like Cosmic Jokers, Tangerine Dream, Klaus Schultze, Kraftwerk, Can, Popol Vuh and Faust. —Do you have any upcoming news that you want to share with the readers?

Mark: In October 2019 I will be bringing STOLEN over, a great new Chinese band that I produced and manage, to play as support act for New Order on their European tour. I have just licensed their album “Fragment“ to U/M/A/A records in Japan and Takkyu Ishino has made a wonderful remix of the single “Chaos” for me. Also A-Bee has made a great remix for it too. In the meantime I am working on my own new album of remixes and tracks too.