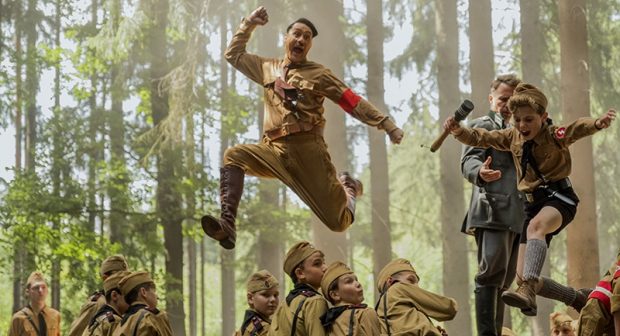 Writer-director Taika Waititi (THOR: RAGNAROK, HUNT FOR THE WILDERPEOPLE), brings his signature style of humor and pathos to his latest film, JOJO RABBIT, a World War II satire that follows a lonely German boy (Roman Griffin Davis as JoJo) whose world view is turned upside down when he discovers his single mother (Scarlett Johansson) is hiding a young Jewish girl (Thomasin McKenzie) in their attic. Aided only by his idiotic imaginary friend, Adolf Hitler (Taika Waititi), Jojo must confront his blind nationalism.

ーーWhat inspired you to make Jojo Rabbit?

Taika: I’m glad you asked that. In 2011, my mum read this book and then described that book to me and then I went off and read half of the book and it inspired the film. At the time, it was 20 years after the Bosnian war and I was reading a lot about that war and it really struck me. I remember being young when everything was happening in Bosnia and Serbia, thinking ‘Wow, kids my age in a full grown war’ and there was something in me that I carried along for a long time and twenty years after that I realized that it wasn’t very long ago and it was still very contemporary. And we all know that kids are looking up to grown ups who are supposed to be guiding them through life and being their mentors and being the smart ones and when wars happen we instantly become lunatics and the world becomes stupid and an absurd comedy and that’s what kids see when wars happen I guess. They look at us in those times and that’s what they see. So I don’t think that’s good enough. I still feel like there is a deeper message in that. So yeah….

ーーI know that you spent a long time trying to bring this film to the screen. And I know that part of it is because of your background and that you have a very colorful family. So could you talk a little bit about how much of a personal project it is?

Taika: So I come from New Zealand. You haven’t been (laughter). My father’s side which is the indigenous people from the ground kingdom of New Zealand and my mother’s side the Russian Jews ended up in all places of New Zealand and so growing up I had a mixed cultural experience. Two cultures that were heavily oppressed but with great senses of humor so I think I tried to bring a lot of that into the style I’ve always used in my films and the outlook on life to my films. I love films that are set in quite dark environments but finding the light in those dark places. 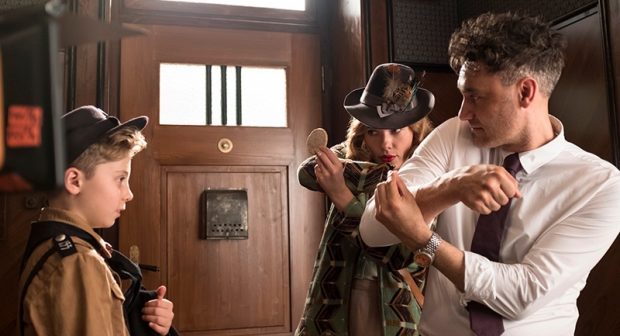 ーーOne of the things I was curious to hear about was the inspiration. I see a lot of references from the World War Two films from “To Be or Not to Be” so on. Especially the hitler shtick which is just fabulous. Can you talk a little bit about how it influenced you when you were making it and staging the scenes?

Taika: I have a big confession to make, I actually haven’t seen those films. A lot of people say ‘Oh the producers!’ but I haven’t seen those films. I have seen a lot that not necessarily had hitler in them. There is a strange one that has been an influence on this. Comedies where we poke fun at dictators and people with power trying to act in a smart way. It’s not my style but I wanted it to be more of a discussion. I’m not good at this…(laughter)

ーーI think you’re doing fine. I’ll ask a question to Stephen. How did you get enrolled in this project? You play a very interesting character in both the source of fear but also someone who is quite laughable and his fanaticism. How did you get involved and how did you approach the character?

Stephen: I had been a fan of Taika’s but I had never met him. So I heard that Taika needed someone to play a Nazi and they want you to do it. And I thought ‘Finally! (laughter) My call has come!’ Because I had always thought that I would be a shoe in for a pissed off Gestapo officer for being tall and the whitest man alive. Unlike him, I have no colorful background. I don’t think my relatives have even left our neighborhood so it was just so exciting to me. The idea of Taika and me playing a Gestapo officer and unlike Taika I had seen a lot of those films that you had mentioned so yeah…

Taika: I don’t like watching other people’s movies because I don’t want to be influenced by them (laughter).

Stephen: I thought it very much tapped into that long history like you said and I thought I would like to be a piece of this and here I am.

ーーWhen did you get Thomasin Mckenzie involved who is the brilliant actress who plays the character of a dancer?

Taika: She one of the first people to audition for the role and she was put instantly into the shot list and I was considering auditioning other people but I already knew that we wanted her so. Her family are sort of theatre royalty in New Zealand and her father and mother are a friend of mine. I grew up in the theatre scene with her parents in New Zealand. I’ve known her since she was very young and she has become the most incredible actress. 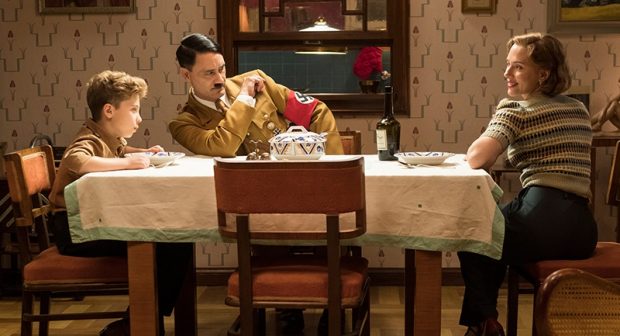 ーーHow did you prepare for the role of Hitler?

Taika: The question beneath your question was that if I had watched a lot of videos and had been doing a lot of research. But no, didn’t do that (laughter). Because he is conjured from the mind of a ten year old who knows nothing about the world so I wanted this version of hitler to be exactly the same. He had to know nothing, he had to be an idiot, more of an idiot than he was and I wanted him to have a sort of ten year old quality to him. I wasn’t comfortable going method and also wrong guy to be going method with (laughter). You would have to cut up a ball!

ーーYou had juggled a serious topic with comedy. I was wondering how you approached that particular style.

Taika: I grew up watching a lot of World War Two films and that particular war, I think the lines between good and bad were very clear. I’ve always had this infatuation so watching all of these movies for all of these years, they were very very dramatic movies and the style of telling this story didn’t vary that much. Just in my own style, I don’t think I would be very good at just making a straight drama. I just don’t like shots of people being depressed all of the time. But I wouldn’t want to do a straight comedy because it would be inappropriate. So I feel like telling these stories again and again than we have to because there is a reason as to why they say we should never forget about what happened and kind of weirdly that we are forgetting. So I think that it is important to keep telling these stories again and again and especially that story. I think you have to retell them in an interestingly new way. I object to people saying ‘It’s a comedy about World War Two!’ because it’s not. It’s a story about World War Two with some jokes. You know I think that it is a access point for audiences and also for younger audiences to be pulled into the story and the style to understand what happened.To keep finding new and inventive ways of keeping the story running.

ーーCan you tell us about how you got those young actors to become involved in the films and how you got such incredible performances out of them?

Taika: Yeah, kids you mean all of us. With casting those kids, Roman came right after the casting process and I think we were a little bit worried about finding someone right for the part and usually when I cast children in my films I just look for someone who resembles as closest possible, the character. Or if I find someone that I love, then I will change the character to suit them. I never ask kids to pretend to be someone else because it’s too much you know. Adult grown up actors, they tend to over complicate things a lot. But with kids I think you get the purest performances when you just let them be themselves and learn the words. Roman really embodied the sensitivity that I was looking for and Thompson as well. Once you do that it’s sort of smooth sailing from then I guess. I think the hardest part is casting them and finding the right kids.

ーーIt looks similar to the film, Butterfly. I just thought that maybe there was a significance to that. Can you expand your comments on the Butterfly? My natural instinct is of course to remember the first world war and is that in any way a reference?

Taika: You got it! You got the reference. It was one of the first anti war films and it was absolutely beautiful. So that is the reference.

ーーThank you so much Jojo Rabbit!